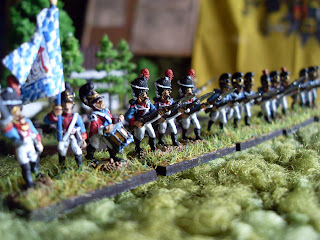 Today we return to Wagram, 1809, and look at modelling a brigade of Bavarians, attached to the (French) Army of Italy.

This is certainly one of the more interesting units of the period. The Army of Italy will be huge fun to model - as this is a French army made up of a number small Corps from a variety of different nationalities. That includes Italian Guard units, Saxons, Bavarians, etc.  All of these units fought for the French at Wagram, but also fought against the French .. both before 1809 and also after 1809.

The interesting story today concerns the Bavarian detachment that found itself mired in combat at Wagram along with the Army of Italy.


The main Bavarian force was some distance away during this campaign, probably still involved with quelling the disturbances in the Tyrol. As developments were progressing towards the fast approaching Battle of Wagram, the 2nd Division under General Karl Wrede was detached from the Bavarian army and sent to join up with the main French forces.

In an excellent display of military discipline, Wrede marched his entire 2nd Division (including foot artillery batteries), 120 miles in the space of 6 days.

They arrived intact, and formed part of MacDonald's controversial offensive*, a decisive move which turned the massive battle into an undisputed victory for the Grande Armee.

As history rolled forward, the Bavarians eventually sided against the French, and Wrede once again met up against MacDonald - as opponents !

Wrede pops up again as an important figure at battle of Leipzig, prior to which he personally negotiated the Treaty of Ried between Austria and Bavaria and fought with the allies against Napoleon.

Promoted to both Prince and Field Marshal by 1814, Wrede represented Bavaria at the Congress of Vienna.

Enough talk, on to the pictures :


Pass me another Paulaner, bitte.


Found an interesting book of memoirs published from an officer of the Bavarian 7th infantry regiment, which also fought alongside these units here- 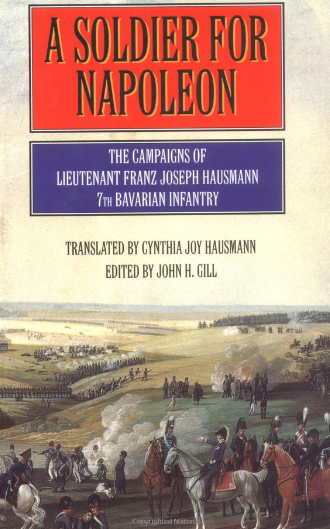 * Regarding the 'controversial' nature of MacDonald's decisive advance to win the battle of Wagram for the Grande Armee, there is much scholarly debate about the formation used by MacDonald during that move.

Faced with a desperate situation, MacDonald concentrated his commands together to form a spearhead, and pushed forward at a critical moment. As a result, a gigantic 'N' shaped formation rammed into the Austrian centre.

Had satellite images been available for 1809, we may perhaps see this N formation on google earth as some gigantic homage to the Emporer himself . According to his memoirs however, MacDonald suggests that he was a little pushed for time, and had to go forward with what he had ..

To quote Art Pendragon :
(or read The Whole Enthralling Thread from the napoleon series forums)

G'Day
I admit that I must use part of Marshal DacDonald’s Recollection, even if the Marshal admits the he did not intend to write a menoir, but merely his recollections of events which transpired long ago.
From his reminiscences of the event, he informs us that he was in a desperate position, which required a necessary risk. With that said, I fully understand that he is recalliing the event.

The French system of 1805 was established upon l'ordre perpendiculaire or perpendicular order, which acknowledged the general principles of the Reglement de 1791, but it must be remembered that the Reglement was not a settlement of older instructions of discipline. But they were in fact developed after the Seven Years War, under the influence of the Prussian methods and their military system. It was therefore a continuation of the Prussian tactics in all its forms, and French sought to adapt their own system of movements that best suited their military system as years progressed.

French Tacticians at the time believed that all troops should possess; 1st, strength; 2nd activity, which produces celerity; and 3rd, universal mobility: by this latter quality must be understood as a formation adapted to all kinds of ground, and to be able to act against all species of assailing bodies of troops; also, that the body of troops use their arms to the greatest effect against the enemy.

With this in mind; it came about that a compromise of both the advantages of the light order en mousqueterie, and order by depth (light order not to exceed six ranks, but not less than two ranks. While in the old linear system; it relied upon an order of depth which did not exceed 12 to 15 ranks.

Nevertheless; according to the leading Tacticians of the time; there were those who wanted to combine the two depths into one system.
Therefore getting back to Marshal MacDonald, he relates how he was preparing to assault the Austrian position along the Russbach, when he received orders from the Emperor to redirect his advance.

It was also understood that there was a gap in the French line toward which a great body of Austrian cavalry were headed.
with that said, it was common practice as a measure against cavalry when infantry were deployed to form lines doubled, such as the British were found in four ranks at Waterloo. -Lines doubled were more common that thought by modern historians.

From 1797 onward it was common to find a body of troops en colonnes serrées et de la ligne déployée (flanking battalions in column and center battalions doubled while deployed).With a great body of troops, it was possible to find them in a formation called a “colonne vuide”, this was a configuration of troops from battalion to multi-division level arranged to combat cavalry whilst manoeuvring towards an enemy's line of battle. This same formation was used in the 1700s, but as a defensive evolution for retiring before the enemy.

Though the colonne vuide had been around since the 1700’s, it was given new life within l’ordre perpendiculair. Marshal MacDonald decide to use a compound evolution that was within the general principles of the French military system for grandes manoeuvres. For those who critic the formation used by marshal MacDonald, it is plainly understood that they themselves do not understand the system used by the French.