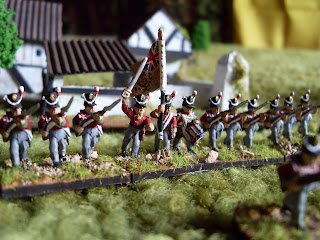 Not a regiment in this case, but a Brigade. Today we time-travel to Bussaco in Portugal .. and the year is 1810.

We will now have a look at modelling Stewart's Brigade, which forms part of Hill's 2nd Division.

A little confusing perhaps ....  but then again, the battalion is the combat unit, and the regiment is merely an administrative unit. Sadly, for the wargamer, this means that modelling a real life combat brigade of the period means that the facing colours and flags are all over the place.


In this case, I have gone for a generic Buff coloured flag for the Brigade, since the majority of the regiments contributing battalions to this brigade have buff facings. Makes sense ?

Enough talking .. time for some pics :