Tired of having yet more little scraps of paper on the battlefield to mark the names and locations of Corps commanders ? Tired of having them blow around in the wind ? 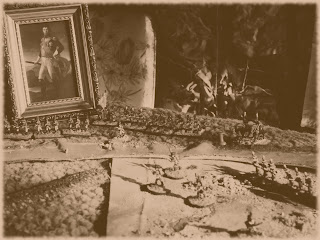 Get some small cheap picture frames, preferably in some ostentatious period style, and print out mini portraits of actual commanders.

The whole exersize of hunting for photos online yields a wealth of useful information on the actual people who led the troops on the battlefield. Not only a visually effective gaming trick, but also very educational. Highly recommended.


So I found these frames at the Reject Shop, and thought they would be just the trick :

On the subject of period costumes ... yes it can be done, if you have the coin to spend.

Photos hot-linked from Empire Costume.
Posted by Unknown at 10:19