Following on from the previous post, here is a brief selection of some of the other Battalion scale Sabot bases that I have in  mind for running big games.

After many play tests, I am convinced now that using Sabot bases is not only convenient for ease of movement, but it also adds a lot of clarity to the tabletop.

It is definitely something worth playing with.

The rationale of using Sabot bases for each Battalion scale unit are many :


So lets have a look at some possible designs of Battalion Sabot bases to reflect different scenarios :

Start with the simple ones ....


My Prussian Musketeer battalions for this campaign are operating almost exclusively in Battalion masses, 2 companies wide.

Due to the large scale of the campaign, and need to compress as much mass as possible on a given frontage, this formation allowed easy control of the very large and not very well drilled armies.

They rarely changed from this formation (as far as I know).

This Battalion base allows for the following Formations : 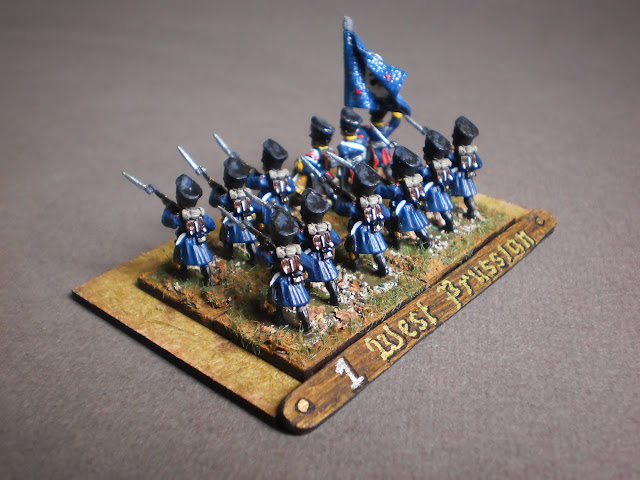 For Austrians in the same Campaign, Im using the same setup as these 4" x 2" bases - but having a pair of these bases for the larger Battalions.

The Austrians enjoy fighting in heavy but moderately flexible large mass formations. All other restrictions apply.

Lets have a look at some Cavalry now ... 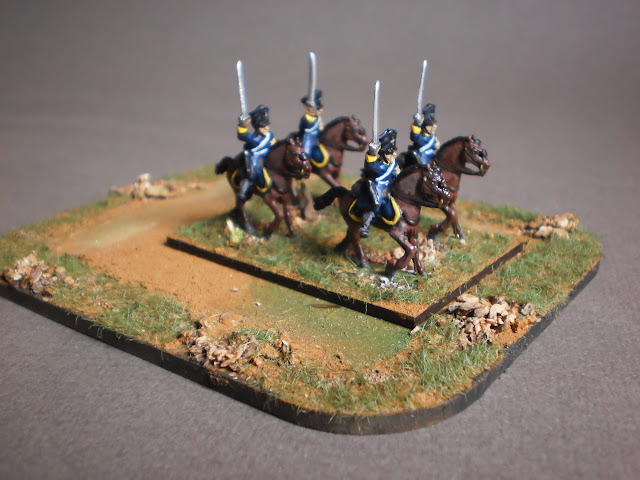 To make them stand out as Cav bases, Im using standard drink coaster MDF bases with rounded corners, which are available from the $2 shop.  (about 40c each)

These are a not as densely packed as the infantry bases, which denotes how the Cavalry unit exerts a wider zone of control and support radius. 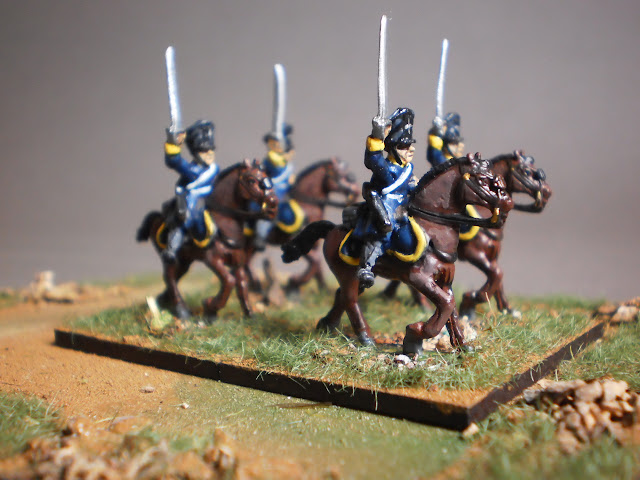 These are supposed to be some generic Landwehr cavalry .. hence the Dragoon figures with a Landwehr Litewka jacket. 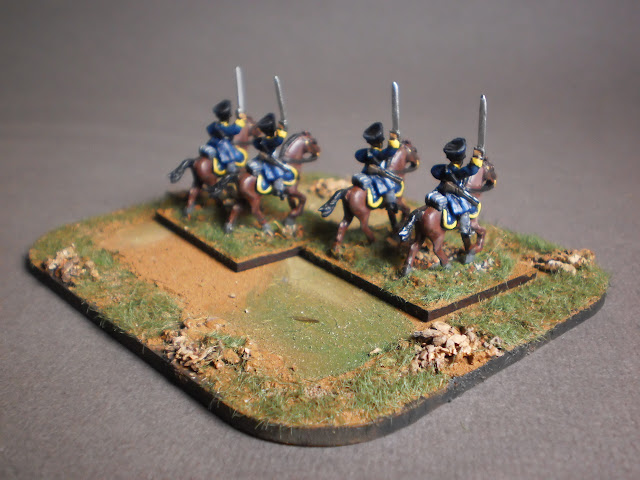 Drink coasters are 4.5" x 3.5" .. giving a few options for orientation or formations.

Cavalry  bases can then be added or subtracted from play, free of charge on an as-need basis.

A Cavalry regiment of 4 squadon sized bases, for example, can squeeze onto a single coaster, or expand up to 4 coasters all in base to base contact, and maintain their cohesion. 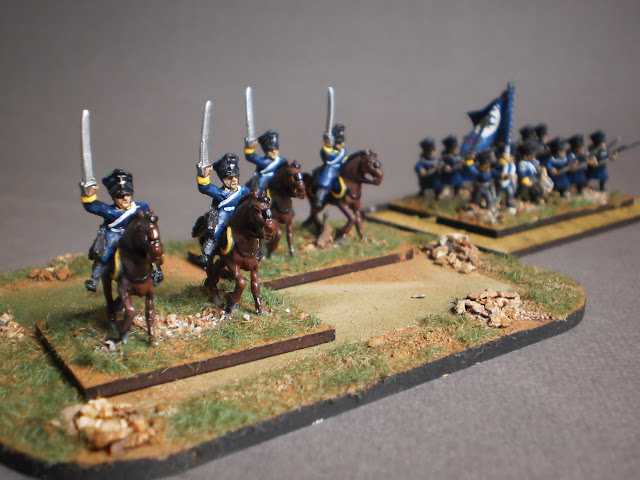 They are also MUCH easier to move about the table in this format. 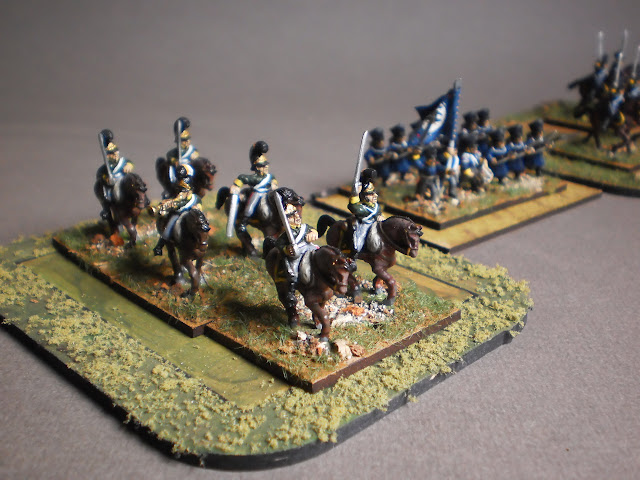 Here is a Russian Cavalry group in a single frontage column,. These guys are from the Soumi (Finland) Dragoon regiment. 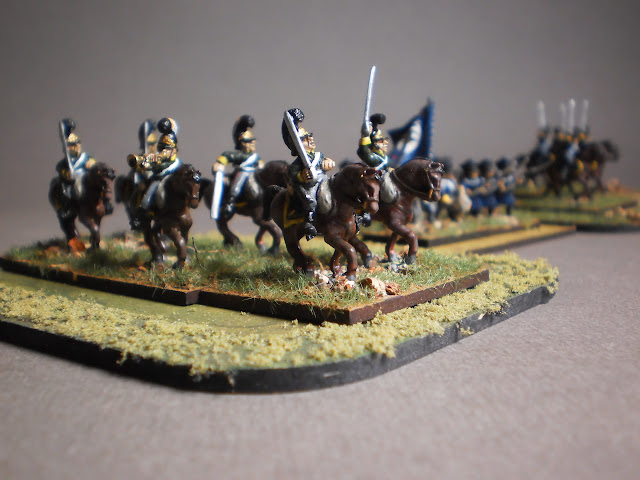 Lets have a look at some Russian Infantry : 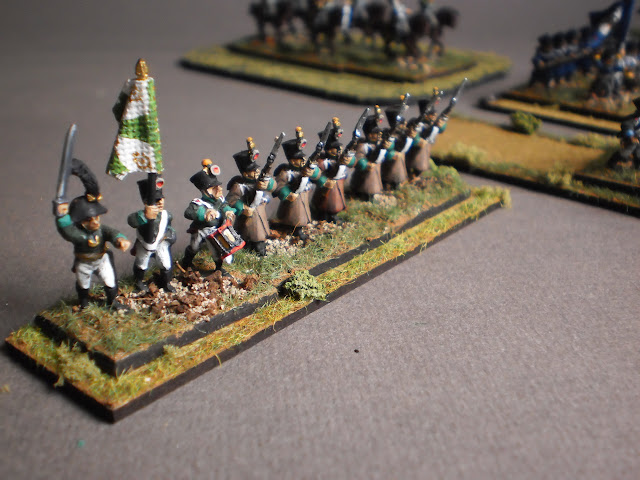 These guys are still in their 1805 pattern Shakos, but I have put them up in this organisation to show how Im doing 1813 Russians for Leipzig.

In practice, a lot of Russian Regiments could barely field 1 battalion on this campaign .. at an embarrassing strength of anything down to 350 bayonets for the whole regiment.

For the sake of simplicity for Leipzig, Im averaging the Russians to a couple of 3 base 'Battalions' per regiment.

Anyway, here is a Russian battalion of 3 bases, in a very restricted Sabot base of 4" wide by 1" deep, which only allows for a line formation.


To change to something else is possible for the Russian commander, but requires the expense of command points to change the Sabot base. 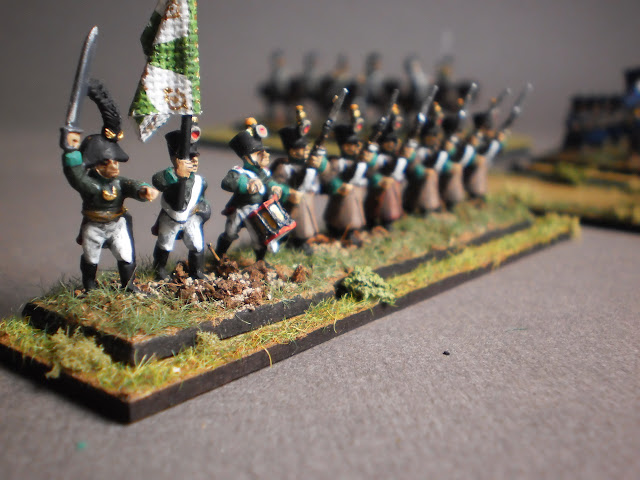 The size of the base allows for a small border around the edge to add some scenic bits.

This also helps hold the bases together in place, so the figures do not easily tip off the battalion base as it is moved around the table, or placed on a big slope. Works well enough. 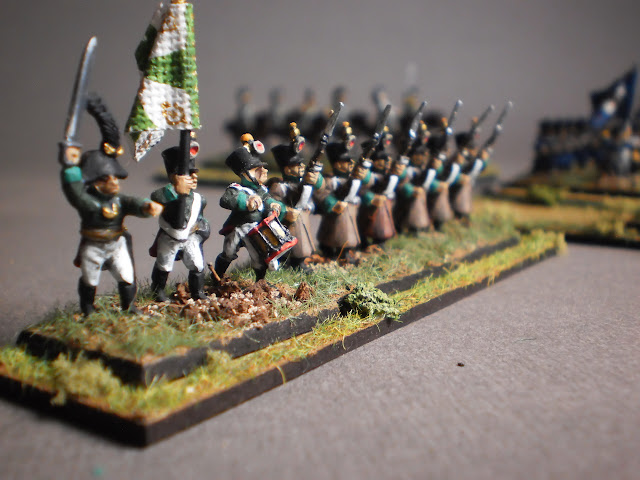 The only other option that the Russian commander gets for Battalion bases is this slightly different 4" x 1.5" base below, which is reserved for Grenadier or Veteran regiments. 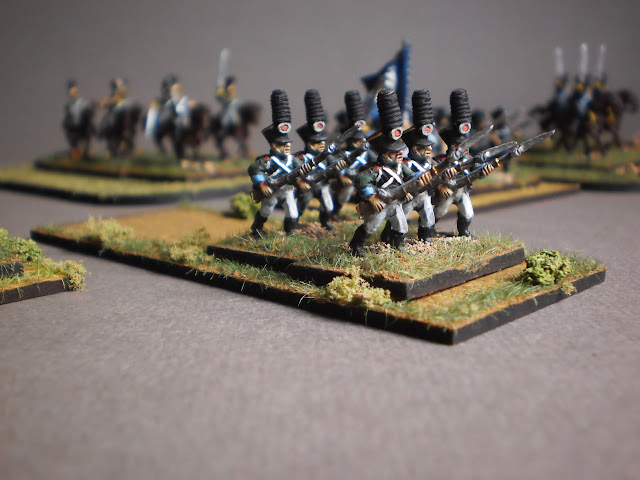 As you can see, this allows either a line across the 4" edge, or a 1 company wide column if you orient the troops this way. 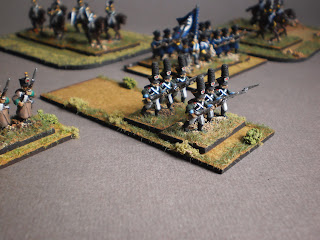 In the 'standard' Russian order of battle for a Division, its fairly rigidly defined, and not something that was changed with any great deal of imagination.

The Division layout is usually something like this, as far as I know  :

So based on my understanding of Russian tactical deployment options (or lack thereof), I think this basing scheme should nicely both assist and enforce that on the Russian commander.

For the dreadfully battered French army of 1813, using the 6 company organisation  (4 line, 1 Grenadier, 1 Voltiguer), Im using a special custom base which is for French  System battalions only.

These are only slightly larger than the Prussian style massed column bases.

These are 3.5" wide  x 2.5" deep, allowing some interesting new options for the French at the tactical level. 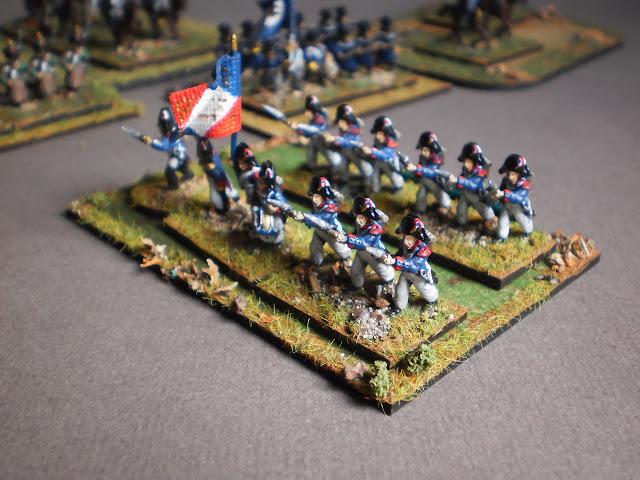 This allows for modelling a French attack column.  2 Companies wide (Column of Divisions), with the 2nd wave spaced back by a short distance.

So this  is 2 waves of troops in 3 ranks that are about 40 paces  between the waves.

On the right of the formation, there is little gap, which is just wide enough to fit in a 20mm wide base - which I am using for the Grenadier company  thrown out onto the right of the first wave to extend the frontage as per French doctrine.

The 20mm gap down the edge also provides a holding zone for the Voltiguer companies - which are on 20mm round bases for true skirmisher deployment.

** Note also that the rather complicated move of fielding the Grenadiers on the right flank - whilst common in the glory days when the Grande Armee was at it's peak, seems to have been less in common use after 1809.

(** source - Scott Bowden, in the commentary of the EmpireV rules) 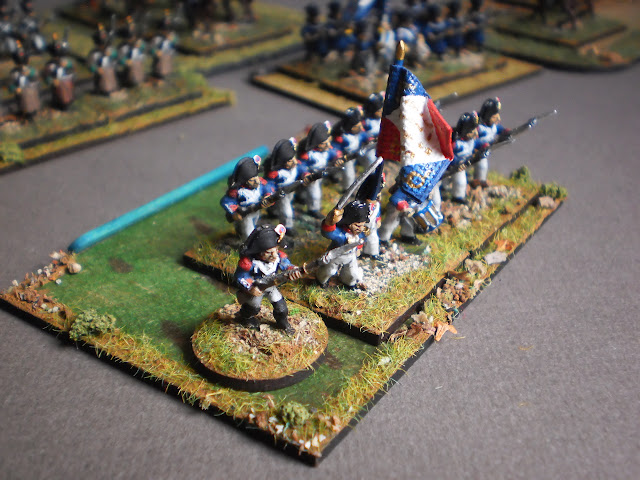 Same base and orientation ... different formation.

There is no gap between the front rank of figures and the second rank. So this represents a column of Divisions (2 company frontage), with the second wave closed right up ... effectively forming a 6 rank mass.

The intention is to reflect the subtities of these tactical deployment options in the combat results (which are all done by the number crunching machine on the computer), whilst allowing the players to still keep their main focus on actions at the Division and Corps level. 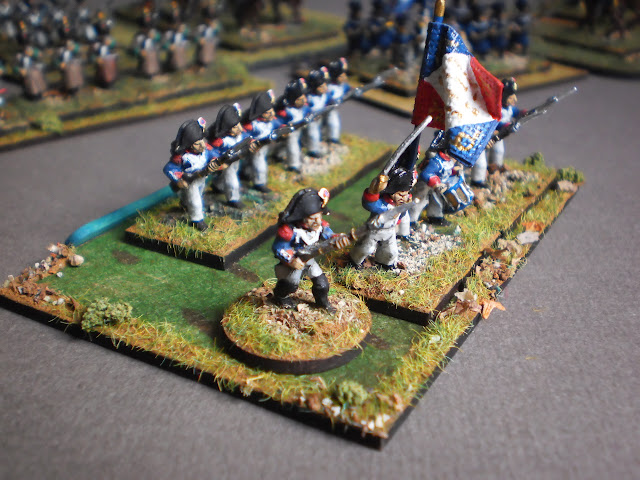 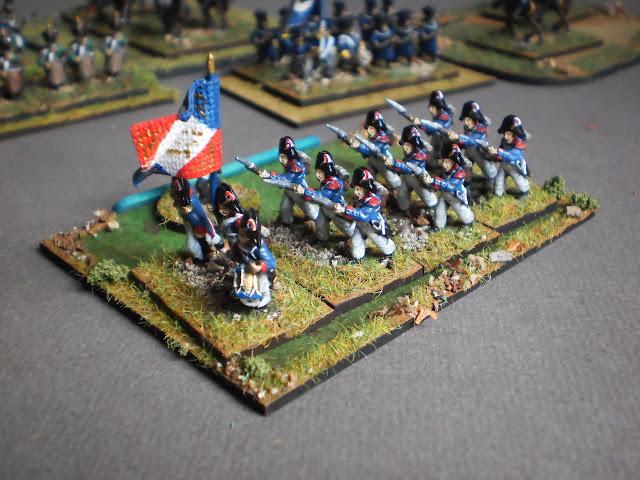 Here is the same unit on the same base, thrown around sideways to form a column of companies. 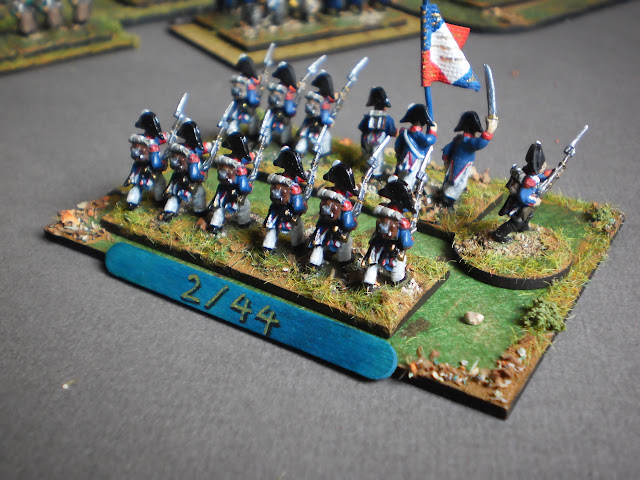 I tried experimenting with different coloured wooden labels on the bases.

Ended up going for the woodgrain look on all the other nations, as it looks perfect for Prussians, Russians, Saxons, Austrians and Brits.

For the French though, they are the only ones that seem to work OK with a coloured label on the base.

Even green labels for the Russians look like rubbish, but these blue labels actually seem to work well. 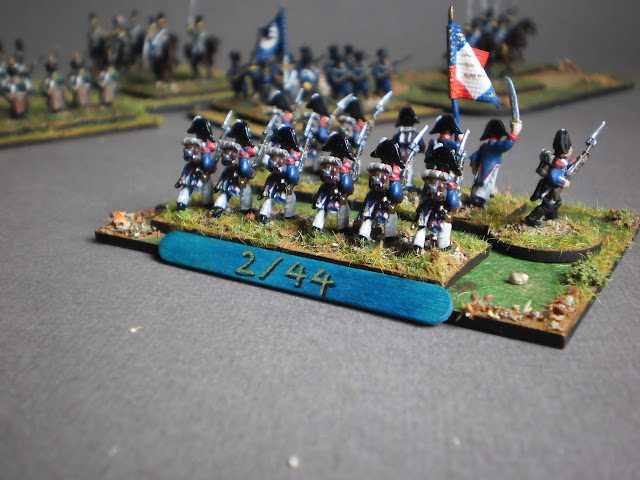 Colour wise, you can buy the pop sticks pre-coloured in this excellent blue tint, so there is zero work need. Just scrawl the Battalion / Regiment number using a metallic ink pen, glue it on ... done.


Footnote - what about Artillery ?

With Artillery, I am happy as they are to be based individually, since the models are quite rugged and easy to move around.

This also suits their tactical deployment as well.  For Battalion guns that is a different story - have a look at the previous post with the early Prussiams, where I put the battalion gun models in the Sabot base as part of the line. 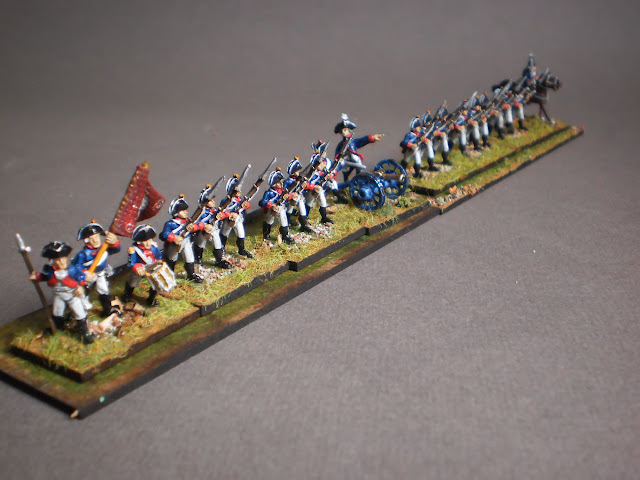 The only other consideration then is the Grande Battery. These are a Grand Tactical element that act like a Brigade or artillery, so in this case, I will definitely require that Grand Batteries operate on their own special GB Sabot base.

Can get quite creative here and make up a little diorama base with ammo dump, gabions, etc to hold the Grande Battery.

This clarifies to the players that this concentration of gunnery in the Grand Battery is different to the other loose collection of guns on the table, and has its own special abilities. Moving batteries on and off the base (forming and disbanding the Grand Battery) costs command points as well.