EmpireV - Morale Tests all done, and a new messaging system.

Computer Hacks of the Day


Ooops - This report is from the 15th April 2012, and I never got around to posting the update.

So here is a belated progress report on the computer system.

Got Phase 3) of the Empire system complete today, which includes applying ME determination tests, and all of the subsequent morale checks.

In addition to that, I have added a messaging system, so that the little metal men on the tabletop now start sending messages back to whichever player commands them. 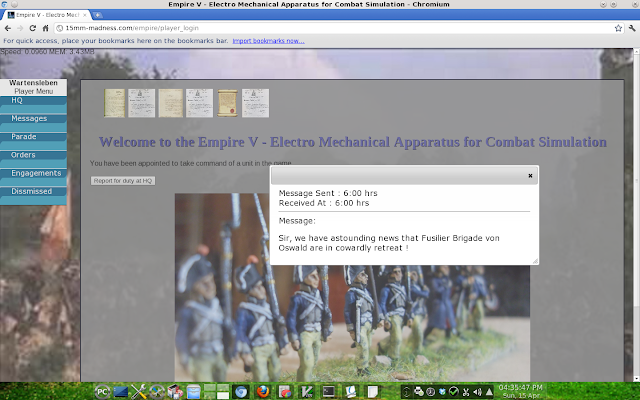 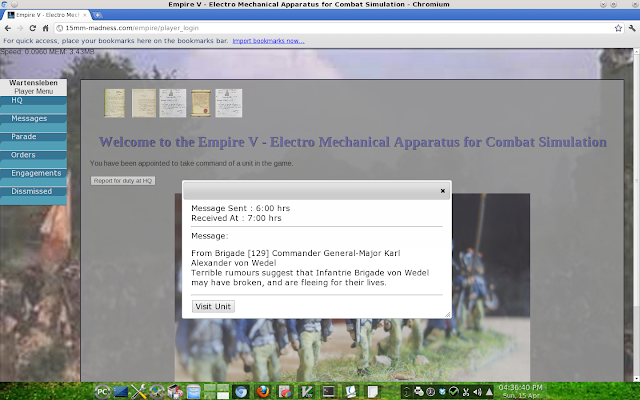 On the player console, dispatch letter icons appear as these become available .. click on them to open the message and get news from the front !

When events happen at the front .. a letter is sent back to the commander, and this can arrive immediately, or after a delay of a turn or 2. On the tabletop, you first see dramatic events unfold, such a brigade withdrawing against their orders. An hour later (in game time), a message turns up from the commander of the Brigade, explaining why they pulled back. 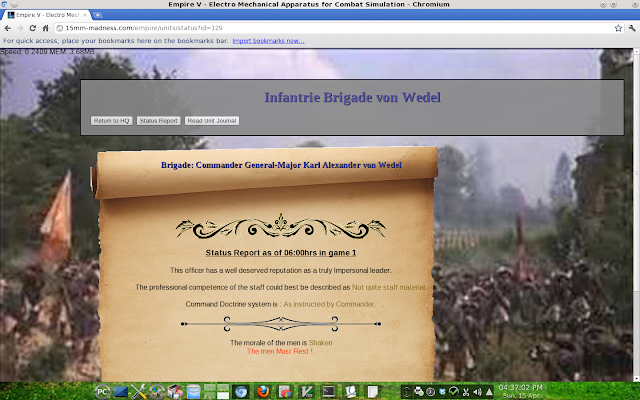 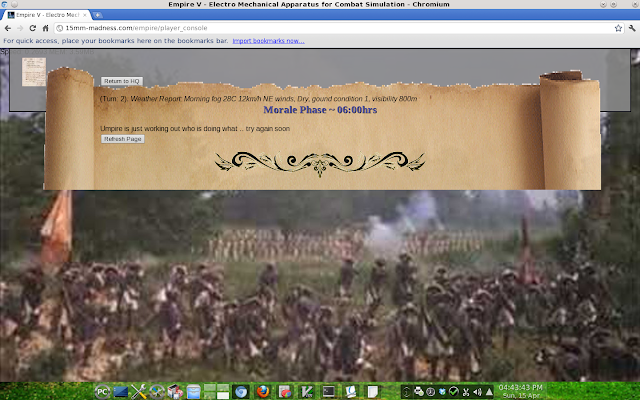 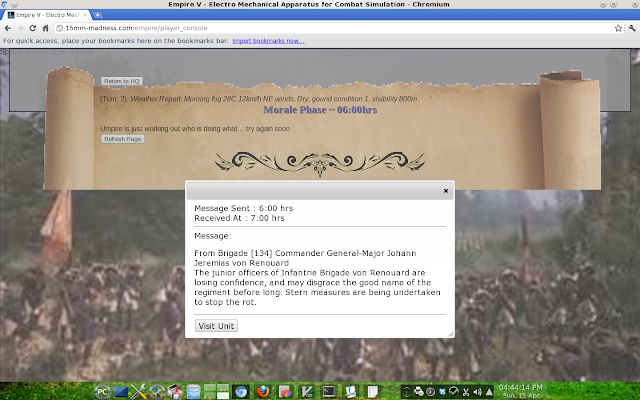 Got quite a lot more finished off since that last update, including :

I need to make some time to put a quick blog post up about each of these, at least to document the path that the development is taking, and gather feedback and ideas.

In addition to that, there is some serious design work going in to the campaign system - very happy with the shape that is taking so far, it is going to work well.

I have also discovered during play testing that there are a couple interesting additions that the computer offers that is just too complicated  to even think about with a traditional system.

1) Rather than fighting off 1 battalion vs 1 battalion at a time .. still calculate the individual combats, but take into account the mass situation of a whole brigade hitting at once, with artillery support and waves of troops following up behind.

I figure that its possible that the larger action is greater than the sum of its parts in some way that is possible to quantify.

Good chat going on HERE on TMP if you are interested in following the sprawl of ideas about this concept.  Contributions to the discussion from authors of many popular commercial rulesets as well ... great !

2) Making big battles more scalable by running tactical actions in parallel. So if you have 10 players a side all squared off against each other - just run all 10 in parallel, with a synch point being the last tactical impulse.

Completely impossible to do this without a computer I reckon. But getting the computer to do this smoothly without things getting completely out of synch is an interesting problem.

Anyway ... enough blogging about it, more coding to do :)