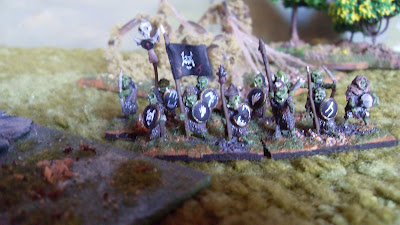 Today we have a small diversion ... a small unit of Orcish warband and a Hero / General unit to lead them out of the darkness to raid and plunder quaint 18th Century villages.


Next up for the Orcs - a little more Warband, some Chariots (Kn), Riders, Beasts, and a couple of comedy bits to add.

No games in progress yet - quite a bit more to do before the 18th Century battles begin ... but how do you think these guys will go against well drilled line regiments armed with muskets ?

In the meantime, I am putting together a set of house rules to fight 18th Century battles between Civilised imagi-nation armies, and allow for the integration of HoTT armies onto the field at the same time.  Will be interesting play testing that.

The rules are completely different to DBx for civilised vs civilised warfare ... more traditional wargame rules in the style of various Napoleonic sets. However the civilised regiments of horse, foot and gun then translate to HoTT equivalents when they contact HoTT armies on the field.

Whilst the HoTT armies move by PIPs, the civilised armies move by traditional orders and morale rules.  Other than that, the crossover between the 2 flavours of battle is an interesting one to integrate. It should feel like the player is playing 2 different games at the same time, once the demonic hordes arrive.

If anyone is keen to grab a copy of the rules, let me know and I will try to clean them up and then sort out a way to host a PDF file somewhere.