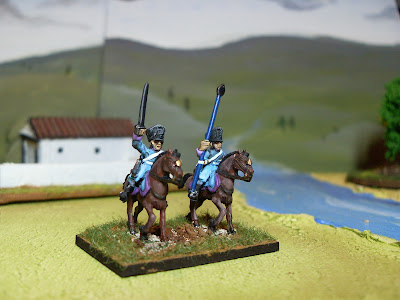 Today we look at the Neumark Dragoons, which formed part of 9th Brigade under Von Kleist's Corps at the battle of Dresden, 1813.

"Here, I must give the greatest credit to the Lithuanian Dragoons, incl. the Volunteer Jager Squadron, who had performed to the highest standards during the entire campaign ... for the way in which they carried out the next manouevre could not have been done better on the parade ground. I had them turn right about by troops, right wheel in squadrons and charged the [French] battalion in echelon ... We had to jump both the ditches which lined the road ... The French were in column and hurrying towards Wiederitzsch ... we got among them and there followed a great bloodbath ..." - Wilhelm Ludwig Victor Graf von Donnersmark

Here we have a small, but truly excellent unit of the period.

During the engagement at Liebertwolkwitz in 1813, the Neumark Dragoons distinguished themselves with a number of aggressive charges against the enemy.

At one point during the battle, it is reported that a Leutnant von Lippe of the Neumark Dragoon almost captured the King of Naples - Jochim Murat himself, and was heard challenging Murat to surrender at the point of his sabre.

That event is worthy of a much larger diorama with larger scale figures for sure ... but for now, this equates to a measly single stand of 15mm figures in Grand Tactical scale.