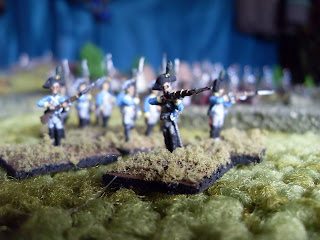 More 18mm Saxons from Eureka. Today we have the Light Infantry Brigade from the Saxon Advanced Guard Division at Jena, 1806.

Light infantry is not the first thing that comes to mind when you think of the Prussian army during the 1806 campaign.

However, the Saxon forces which fought at Jena, contained a high proportion of light troops compared to the Prussians. Especially in the Advanced Guard Division, we find 3 'regiments'  (at Battalion strength) brigaded to form a large brigade of light troops.

Specialist sharp shooters, the Saxon light infantry were the equal of the French in the theory of light infantry. However, their small numbers and their lack of real experience separated them dramatically from the French.

So today, we have my interpretation of a brigade of mixed Saxon light infantry battalions  at Jena, 1806