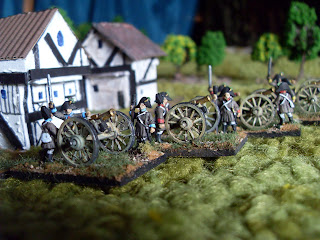 Today we have a look at a battery of Austrian medium cannon from the Napoleonic period.

Since the time of the Seven Years War, the Austrian artillery arm had been recognised as one of the best drilled and equipped in Europe.

During the wars of the French Revolution, and the subsequent Napoleonic Wars, the Austrian field armies had been generally outclassed by the French with their new fangled ways of waging war.

However the artillery arm of the Austrian Army remained an impressive match for the French. By the time of Aspern-Essling, and the following battle of Wagram 1809, the Austrians had truly mastered the art of using massed batteries to great effect. 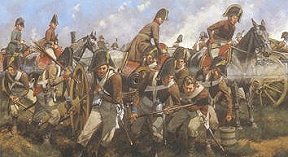 What happened on the battlefield now marked the largest single concentration of artillery to date in the period. Charles withdrew his shot-up and demoralized infantry from the French center, and Oberst Josef Smola, the Artillery Chief for Hohenzollern's Austrian II Corps, organized the artillery batteries assigned to him into one large, 200-odd-gun battery whose mission it would be to destroy the French center and open the way to the Bridgehead to Lobau Island. (...)

Coignet described the effect of massed artillery fire against troops formed in line at Essling:
(...) I felt an urgent call to relieve nature, but it was strictly against orders to move a step towards the rear. (...) Imagine the agony we endured in such a position, for I can never describe it. (...) The cannonballs fell among our ranks, and cut down our men three at a time; the shells knocked the bearskin caps 20 feet in the air. (...) The losses became very heavy. We had to place the Guard all in one rank so as to keep up the line in front of the enemy. (...)

Elzear Blaze added his comments on the sheer terror of being hit by artillery fire:
There are men, however, who, gifted with an extraordinary strength of spirit, can cold-bloodily face the greater dangers. Murat, bravest of the brave, always charged at the head of his cavalry, and never returned without blood on his saber. That can easily be understood, but what I have seen General Dorsenne do - and [have] never have seen it done by anyone else - was to stand motionless, his back to the enemy, facing his bullet-riddled regiment, and say, "Close up your ranks," without once looking behind him. On other occasions I have tried to emulate him, I tried to turn my back to the enemy, but I could never remain in that position - curioisity always made me look to see where all those bullets were coming from.

Smola expertly handled artillery silenced the outnumbered French artillery. Then, the artillerymen, 'lifted and shifted' their fire onto the now helpless, and largely defenseless, French infantry, that had to stand and take it - or the army would have been driven into the Danube. General Pouzet, a longtime friend of Marshal Lannes, was killed, and St. Hilaire was mortally wounded, having a foot blown off by artillery fire. Lannes saw his friend being taken to the rear in a blanket, and he was later hit by a roundshot which shattered both knees, mortally wounding him. Both he and St. Hilaire would die in great agony after the battle was over and they had been evacuated. Lannes could not save them. (...) What the Austrians needed to know, under the heavy artillery bombardement, was to launch an all-out coordinated attack on the French. (...) But no Austrian assault took place." (Kiley - "Artillery of the Napoleonic Wars 1792-1815" pp 207-209)