Great racing last nice with another long stage of over 100 miles, with lots of nasty hills ... and some more unfortunate accidents.

Was shocking to see Sanchez (defending Olympic gold medalist) crash out with a broken collar bone, so he is out for London 2012. 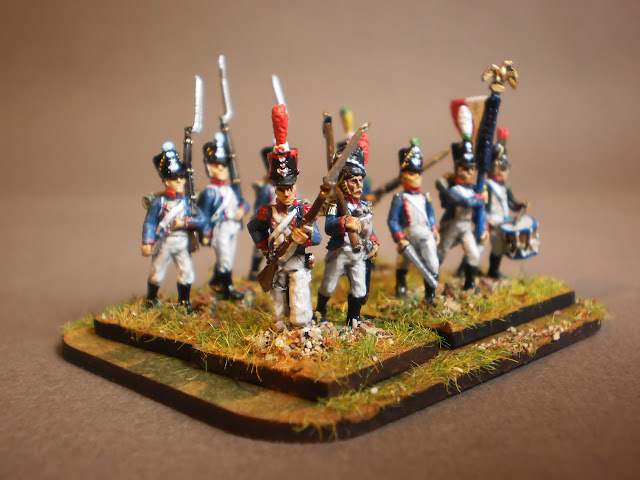 What we did see though was a memorable win for a young French rider in his first tour. It was one of these rare occasions where the risk of hopping onto the breakaway group actually pays off.

A memorable win for Thibaut Pinot - the youngest rider in the race !

What better way to capture that in miniature, than finish off a unit of French Ligne using some of the youngest (newest) figures available ... Eureka's own amazing late French in Bardin uniform in 18mm. 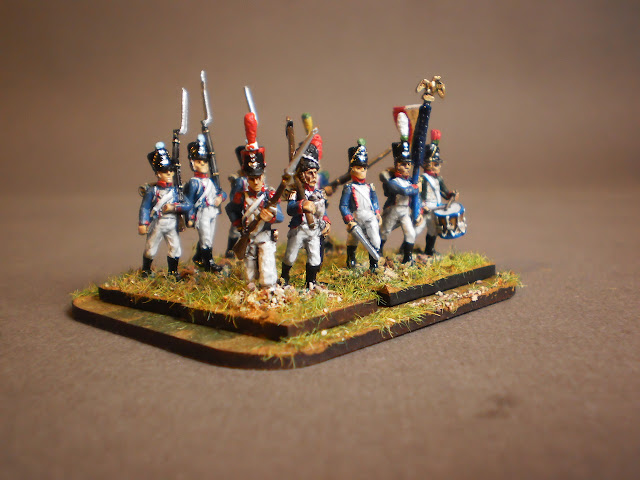 These are stunning figures, beautifully proportioned and full of detail. Quite a challenge to paint well ... I am probably pushing my abilities a little with these ones. 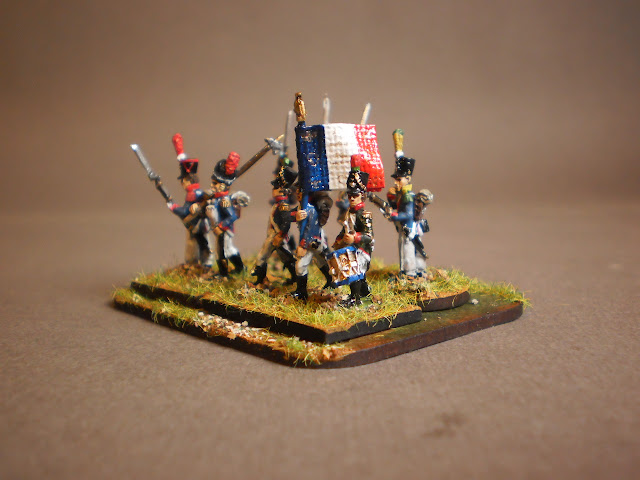 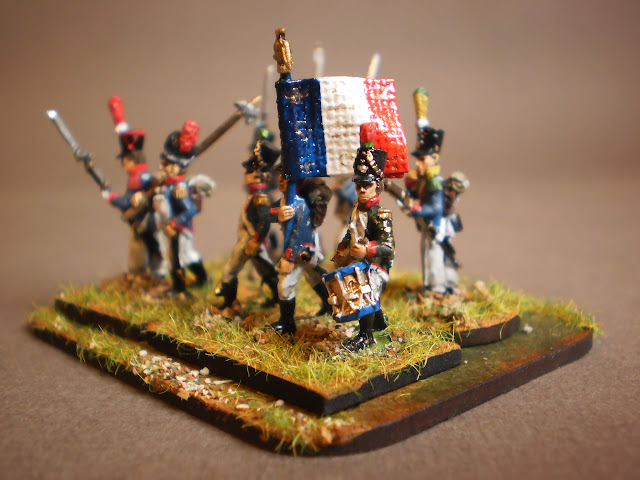 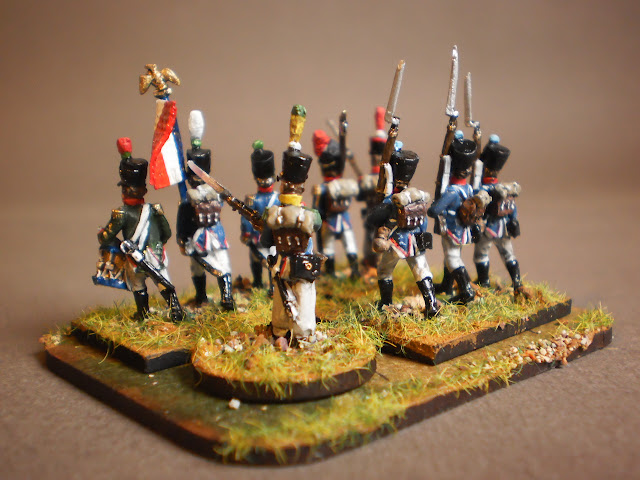 On the battalion base, I have the grenadier company and the 1st fusilier company / color party in the front rank.

Remaining fusiliers and voltiguers in the rear rank.

This formation represents Column of Divisions as far as the tabletop goes. 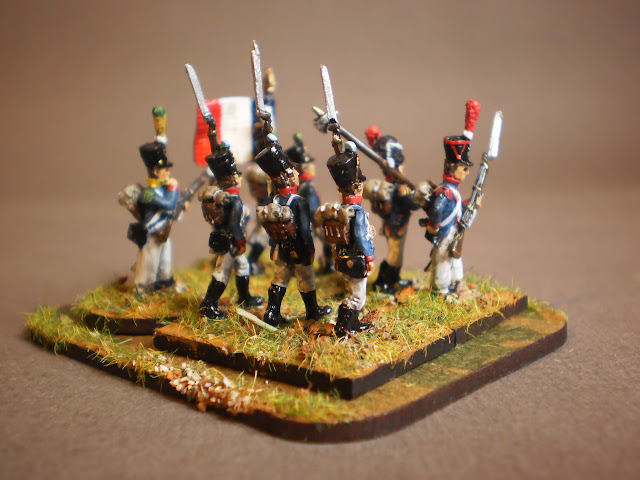 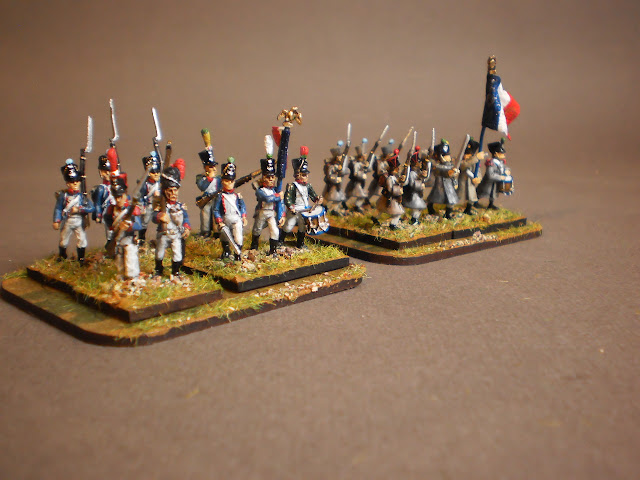 Here they are lined up (in Column of Divisions) next to the 1st Battalion of another regiment.

Eureka 18mm in full dress, with Lancashire 15mm in the greatcoats.

This shot gives you a good guide to the relative sizes.  With the Lancashires, the command figures are slightly larger than their fusiliers, whereas the Eurekas are consistently large.

Even though they are side by side, they do fit together pretty well. On a large tabletop with a lot of space between units, they are perfectly compatible I think. No probs at all. 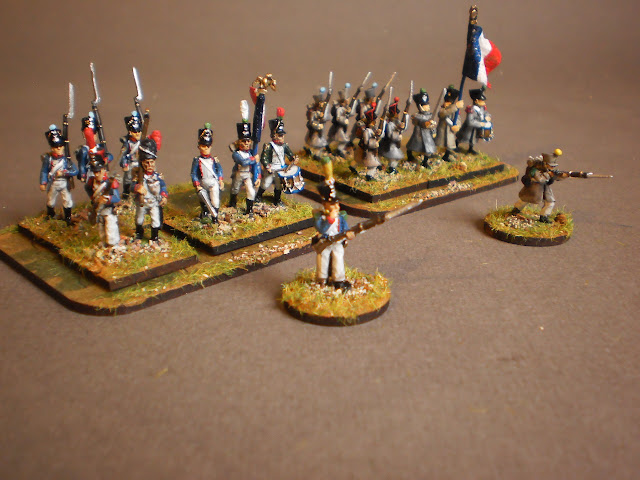 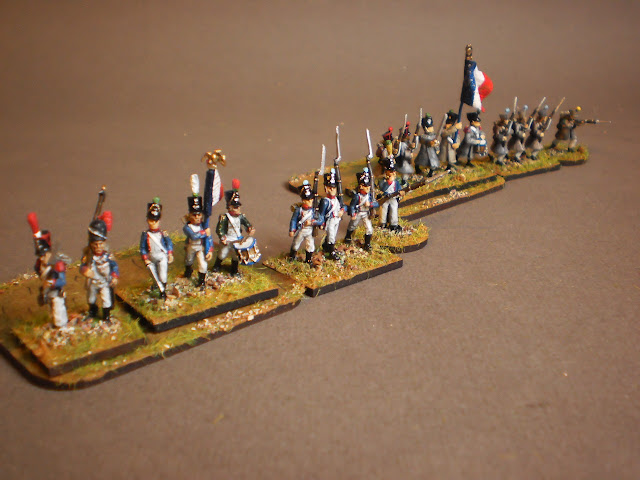 And now both battalions extend out into line.

Note that when going from Column of Divisions to line - that the front rank remains static, whilst the rear ranks file out to the LEFT of the regulating company in order to form line.

This is actually quite critical for Napoleonic era formations.  The drill book for the battalion details different movements for each company .. so for the individual soldier and junior commanders at the company level,  there is a sense of well known relative positions between each company in the battalion.

If the battalion was to form line to the RIGHT of the 1st company .. or even worse, perform an about face at some point ... then the junior commanders and men of the line would be out of position, and chaos would quickly ensure.

For game play, we only allow formations to extend to the LEFT of the regulating company.  Any variation of this - whilst possible, means that the final formation is disordered, and fights at reduced effectiveness.

This is cool, because if you know the limitations of the enemy formations, then you can manoevre around them (attack from the LEFT - or their RIGHT), and force them to fight out of position. 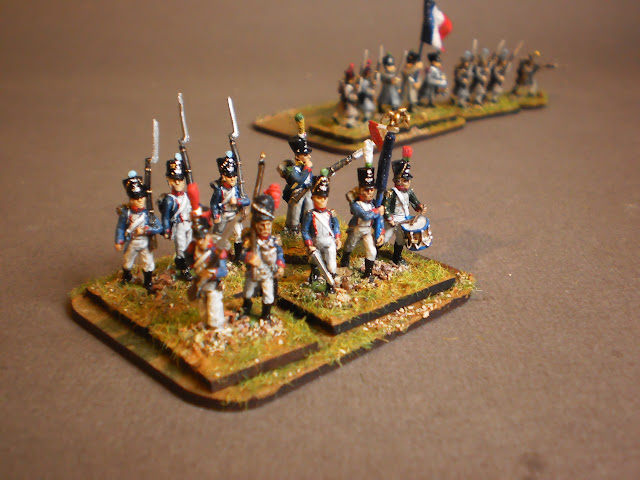 Line falls back into Column of Divisions, as the entire 2nd rank files back behind the front line in 1 single movement.

Note that the 2nd rank must move the distance of 2 companies in order to fall back into position.

It is a simple drill movement and easy to control.

By 1813, most armies operated in this simplified manner, using 2 company wide column frontages with the ability to extend out to the LEFT of the leading company / color party. 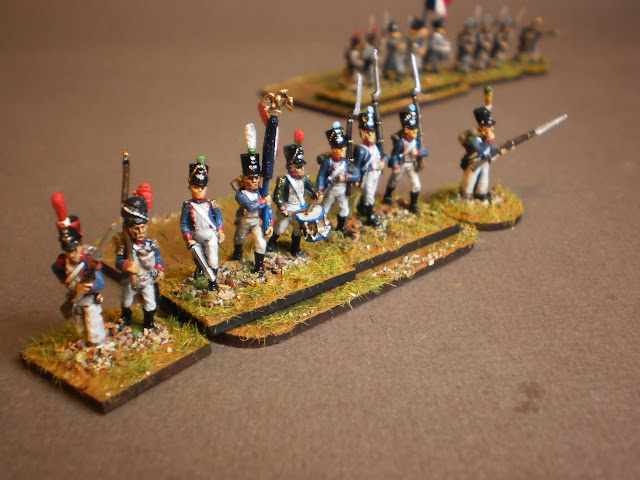 Here, by contrast, is a highly effective French variation that required a little more training to maintain control.

The famous 'Attack Column' that changed the battlefields of Europe !

Note in the line formation above, that the 2nd rank has extended forward on both the RIGHT and LEFT wings of the battalion to form a line. 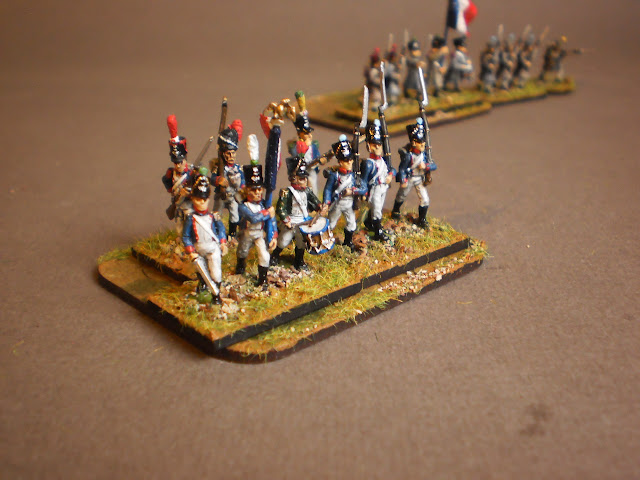 Now, each flanking company can fold back independently behind the line to fall back into column.

Does not look terribly different to the Column of Divisions at first glance .. however, if you think about the movements of each flanker company in this case, they only need to move the width of 1 company to change from one formation to the other.

Deploying from attack columns into line, ((or vise versa) .. requires only half the move distance compared to doing the same evolution with Column of Divisions.

More chaos, as multiple companies shuffle about in parallel, but potentially twice as fast.

This is the most common small unit tactic  for French units in the Glory Days, but restricted to the best trained / veteran units by 1813.

For the reformed Allied armies such as the later Austrians, Russians and the new Prussian armies ... Simple massed formations - variations of Column of Divisions was the bread and butter formation used.

Hope to capture the feel of this on the tabletop using the battalion sabot bases, plus simple rules of thumb re deployment. (ie - you can only extend out to the LEFT of the color party, or be disordered).

Will see if that works on a huge battle.
Posted by Unknown at 15:53