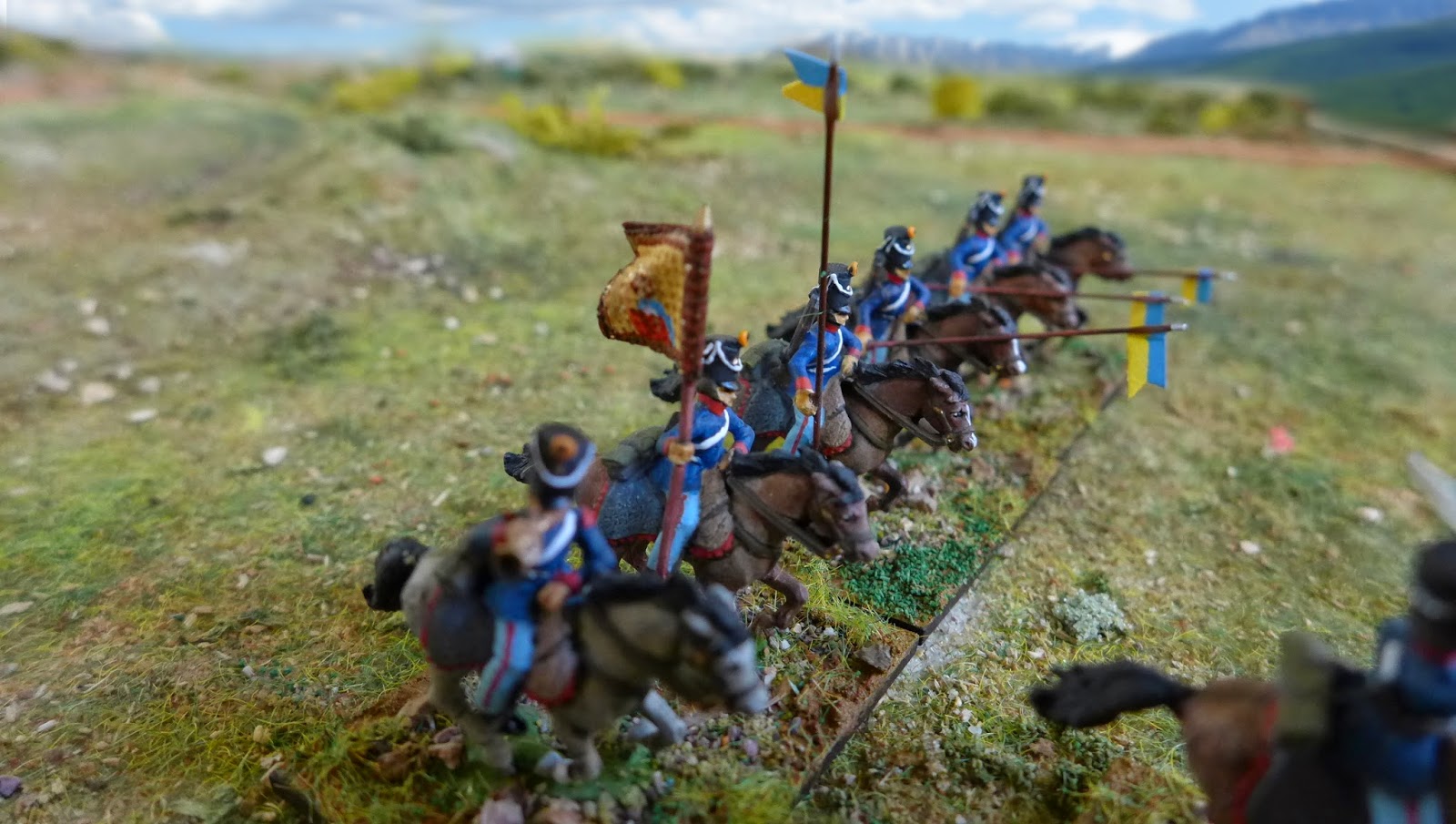 A Russian Army needs a good supply of Cossacks.

In amongst my parts box, I found a number of old Minifigs 15mm lancer types, which I suspect are Russian Cossacks.

Bit hard to tell, since this lot of figures comes from another ebay-rescue, with a bag of unfinished bits and pieces covered in a thick layer of flaking black paint and broken parts.

After a ridiculous amount of work, the rescue is complete, and I now have some half decent Russian Cossacks to take to the battlefield.

Now, according to the Osprey Russian Cavalry Reference (Book 189), there is a variety of different uniforms for Cossacks  of the period, from typically irregular and daggy, through to the very smart.

So I have used the bag of rescue figures to come up a number of different Cossack / Light Lancer regiments from different regions, smartly attired as per Figure 2 in the picture below. 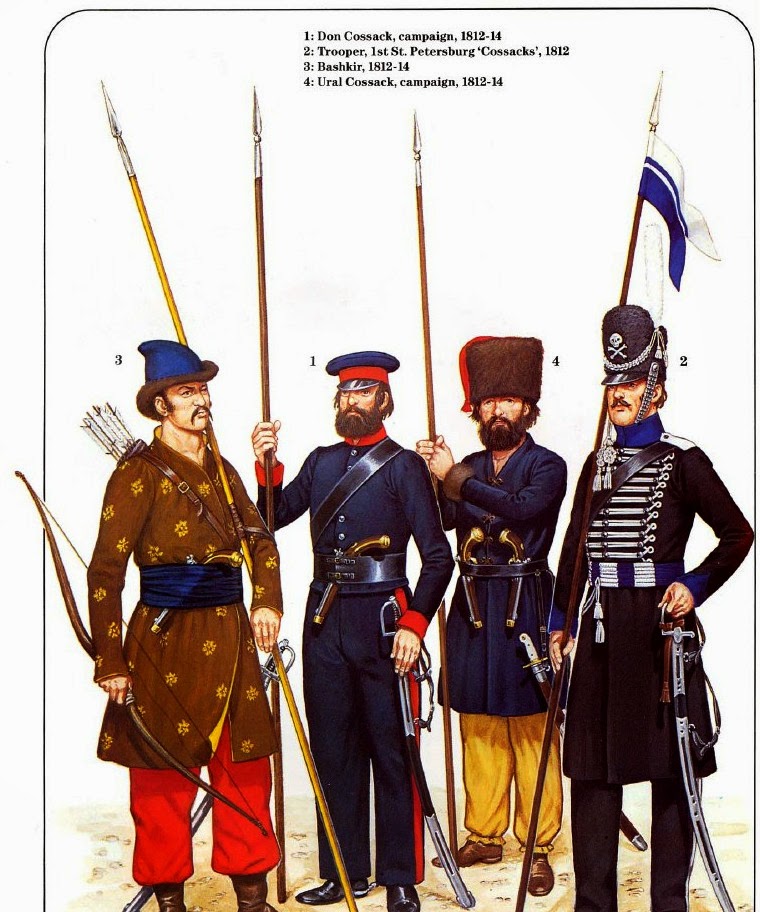 One of the Regions supplying Cossacks to the Russian Army of 1813 is the Ukraine. 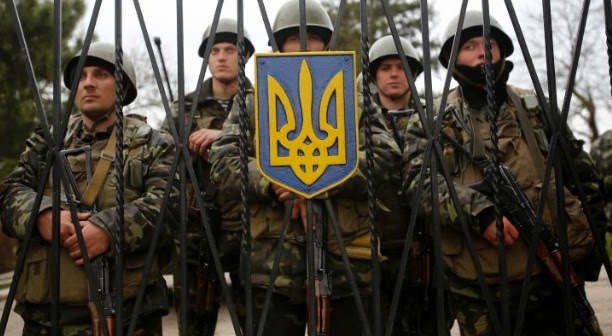 Now .... since I started this project last year sometime, all this contemporary tension decided to erupt just as I was getting this Ukrainian Cossack unit closer to completion.

Under these circumstances (and with due respect to all involved in the current situation), I have taken some liberties with the paintjobs on this unit, and given them a more contemporary Ukrainian pennant colour, as well as a traditional Russian Orthodox Icon  for the unit flag. 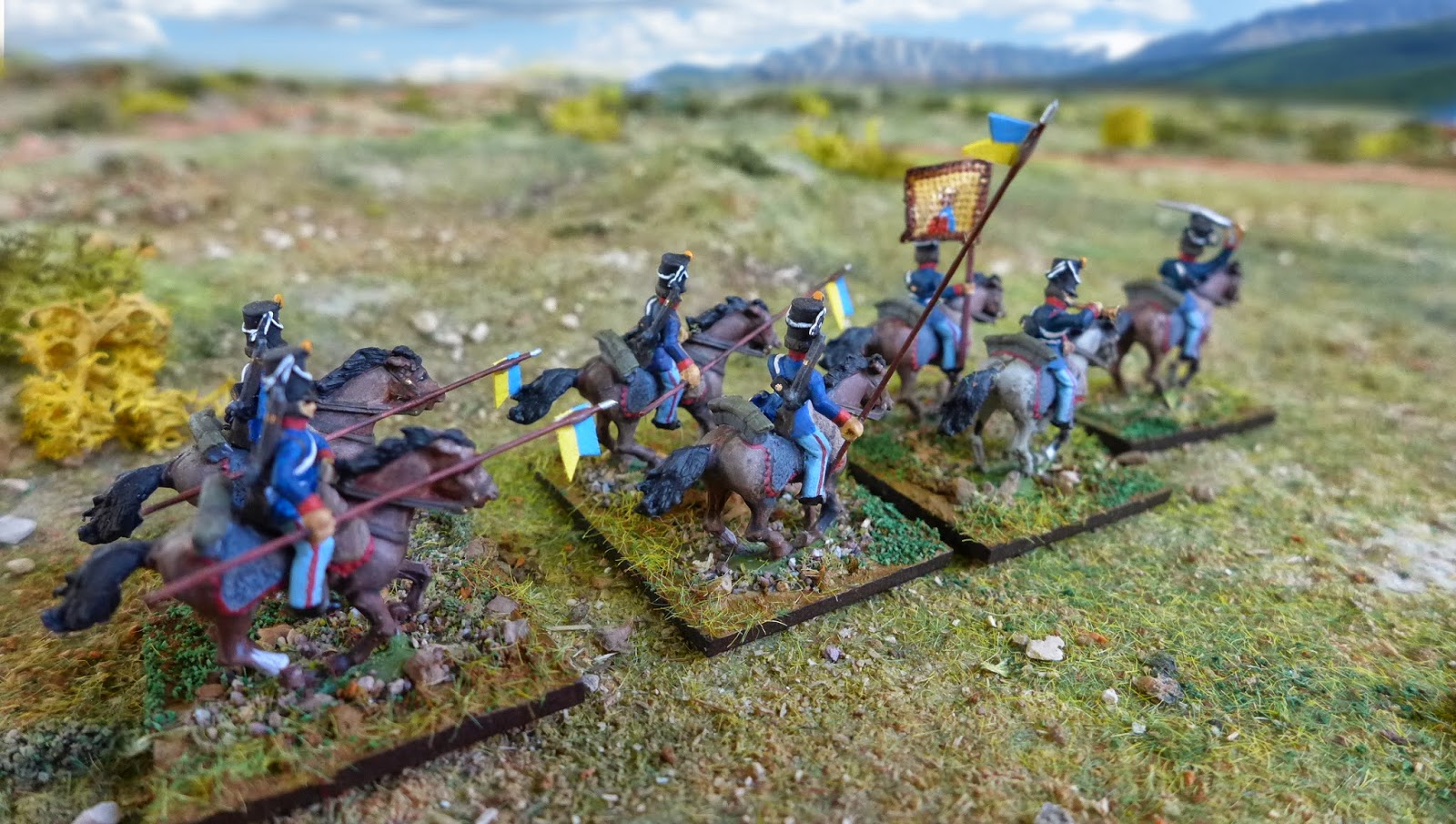 My prized "Ukrainian Cossacks" .. slightly inaccurate perhaps, but these guys have done really well to make it this far. 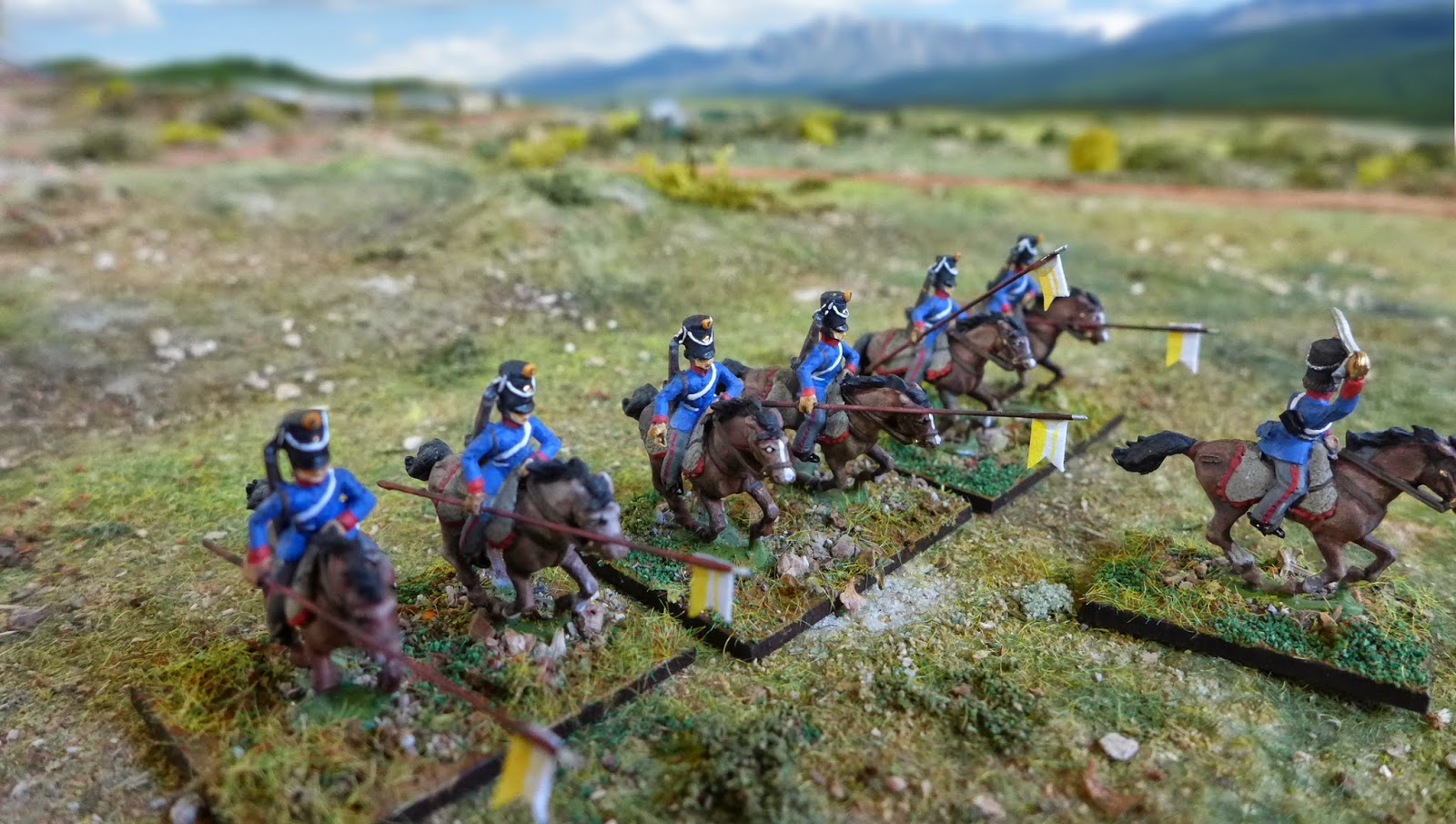 More of the same batch of figures.

Here is a handful of squadrons painted up as "Siberian Cossacks", with a few minor uniform details telling them apart from the "Ukrainian  Cossacks" 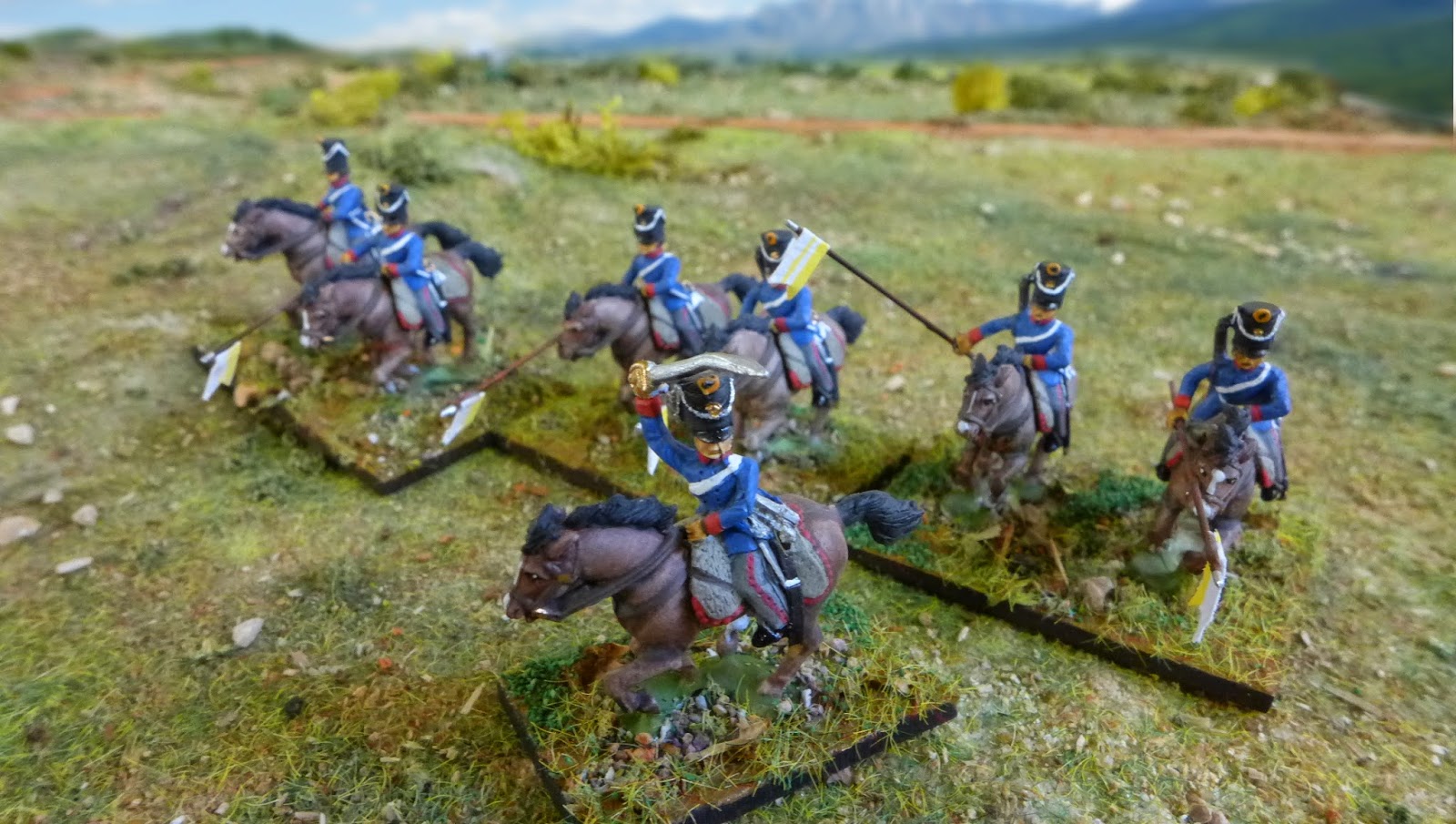 Another thing with these - I think they are Minifigs ... but cant be sure.

As I said, these are all rescues from a mixed bag of figures found on ebay UK, covered in thick black paint, and rather worse for wear.

They have probably been laying about for years before being rescued .. so who knows ?

The cavalrymen are typically Minifigs looking poses, and the horse figures are actually excellent.

They look pretty convincing, but they are a nightmare to pack and store, since those lances go everywhere. 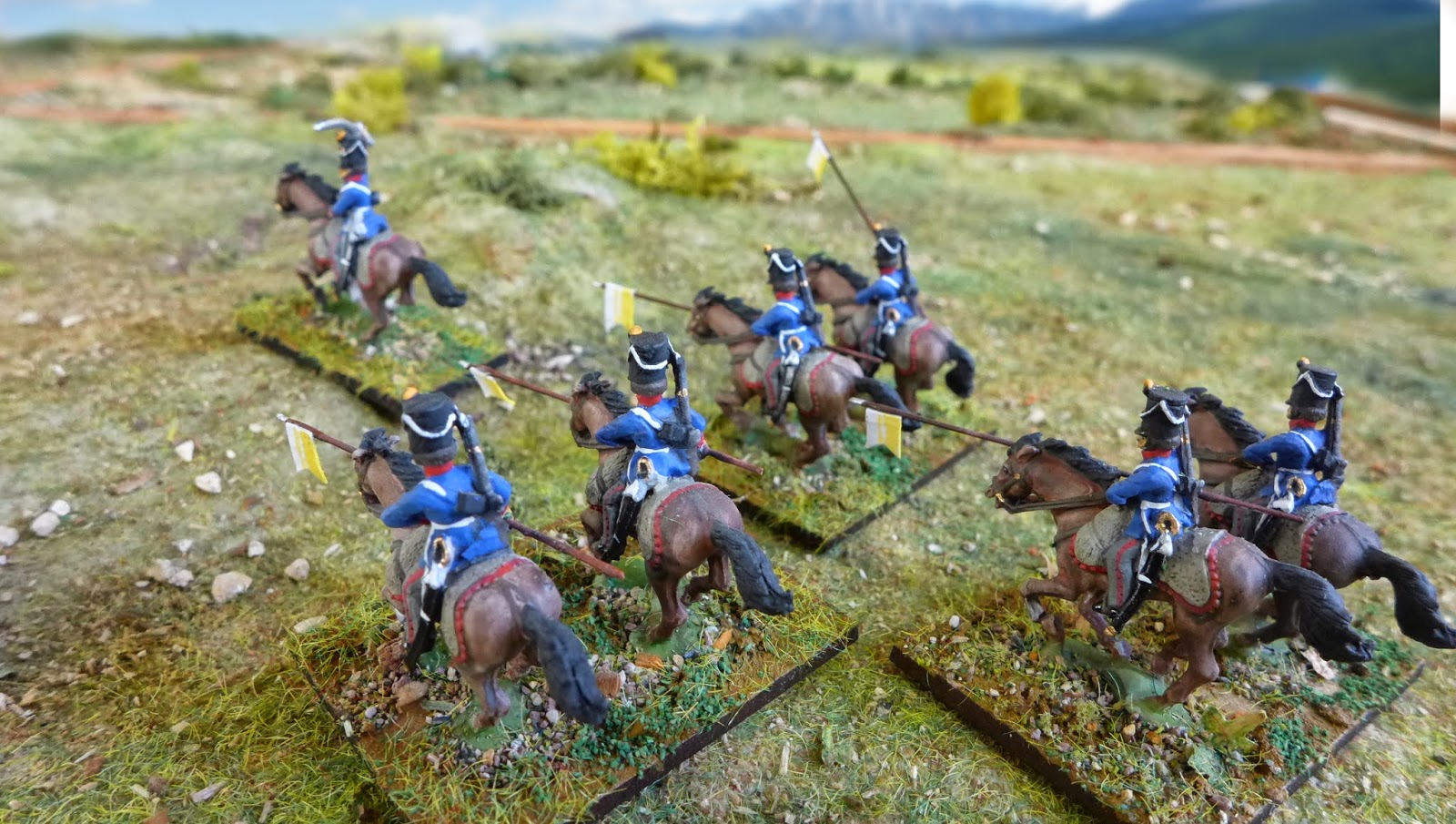 Also, the saddle packs come as separate parts on these figures ... you can see them used on the "Ukrainian Cossacks", and absent on the "Siberian Cossacks"   ... a total pain to put together. 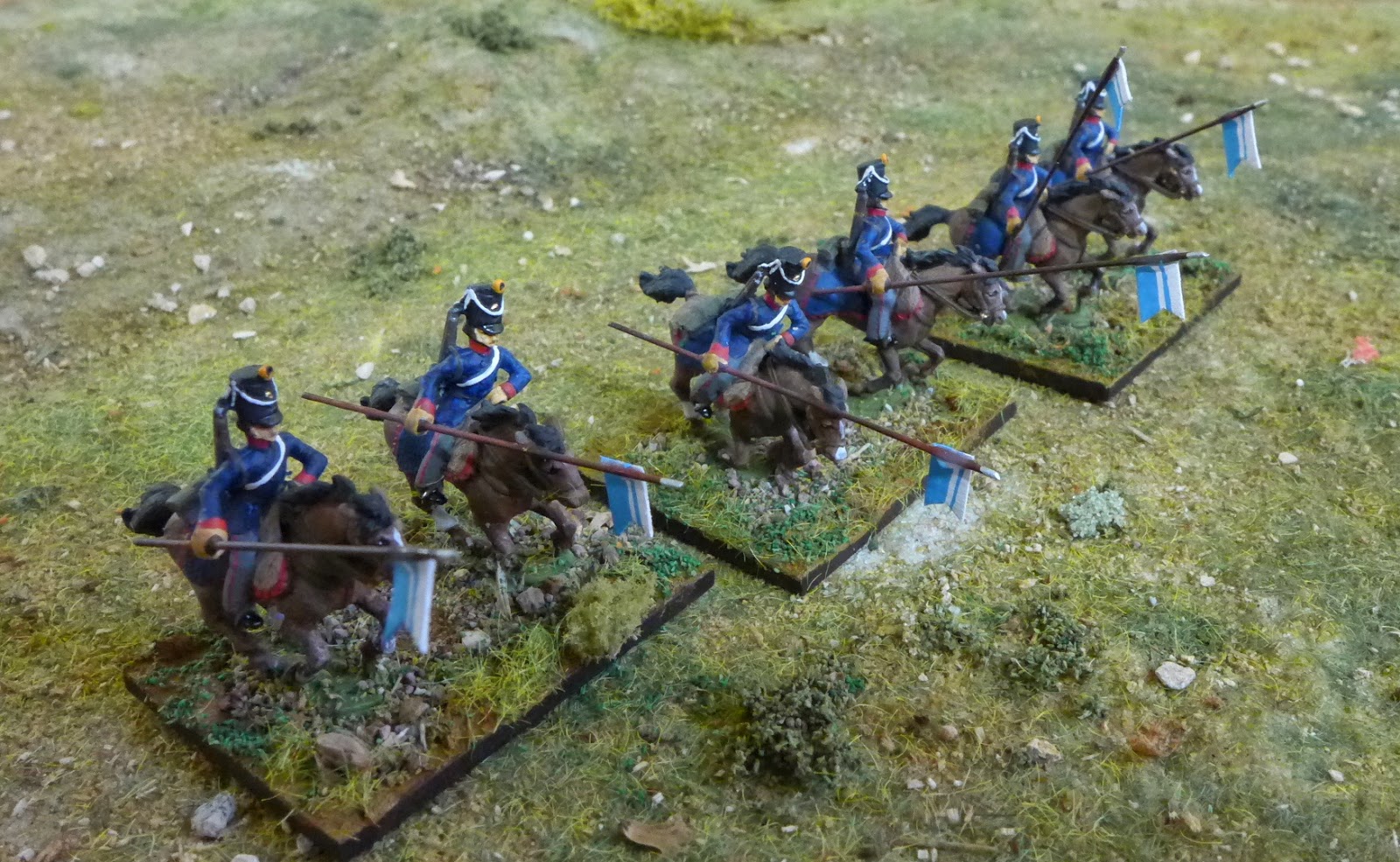 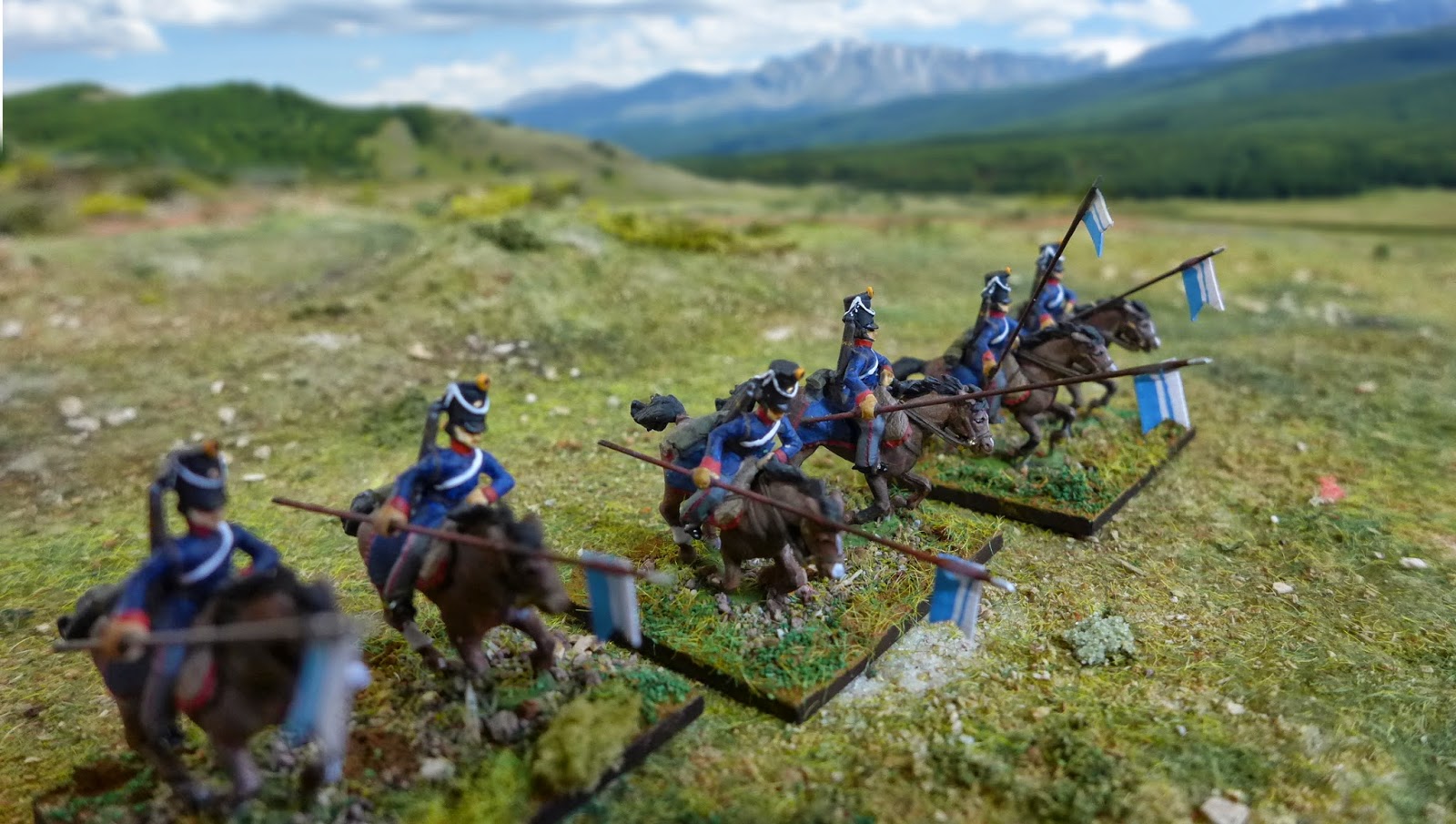 Not all smartly attired Cossacks wore a blue tunic. Here are a couple of variations using ... 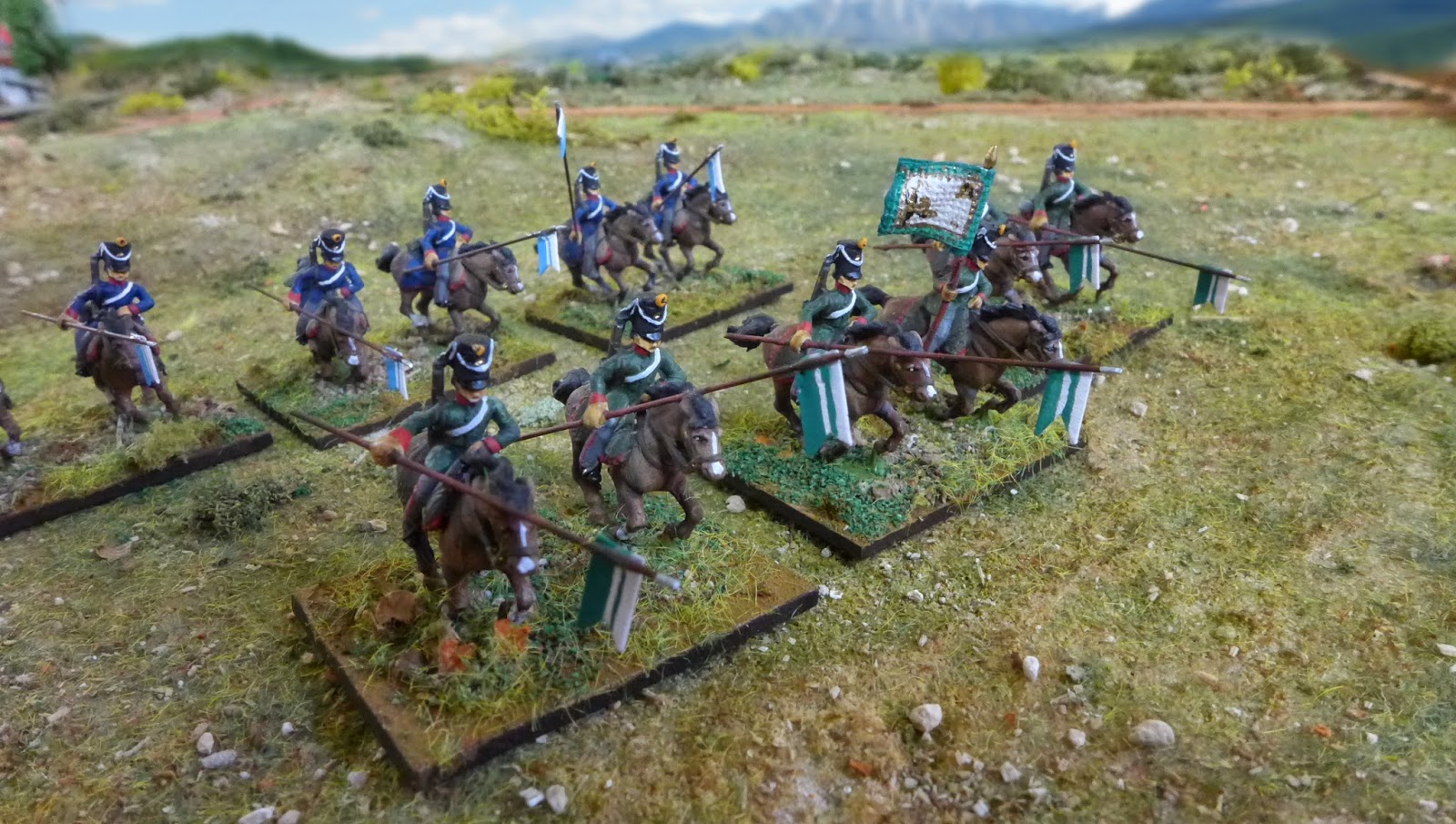 The Tchougouiev  Cossacks here in Green, with matching white over green pennants, and a Green faced Russian Cavalry standard. Sometime between 1812 and 1814, the Tchougouiev Cossacks morphed into a Uhlan regiment, wearing the usual Russian Uhlan uniform.

(For the inspiration for the cavalry standard, many thanks to Peter from Blunders on the Danube for his excellent article on Russian Hussars, including standards : Russian Hussars) 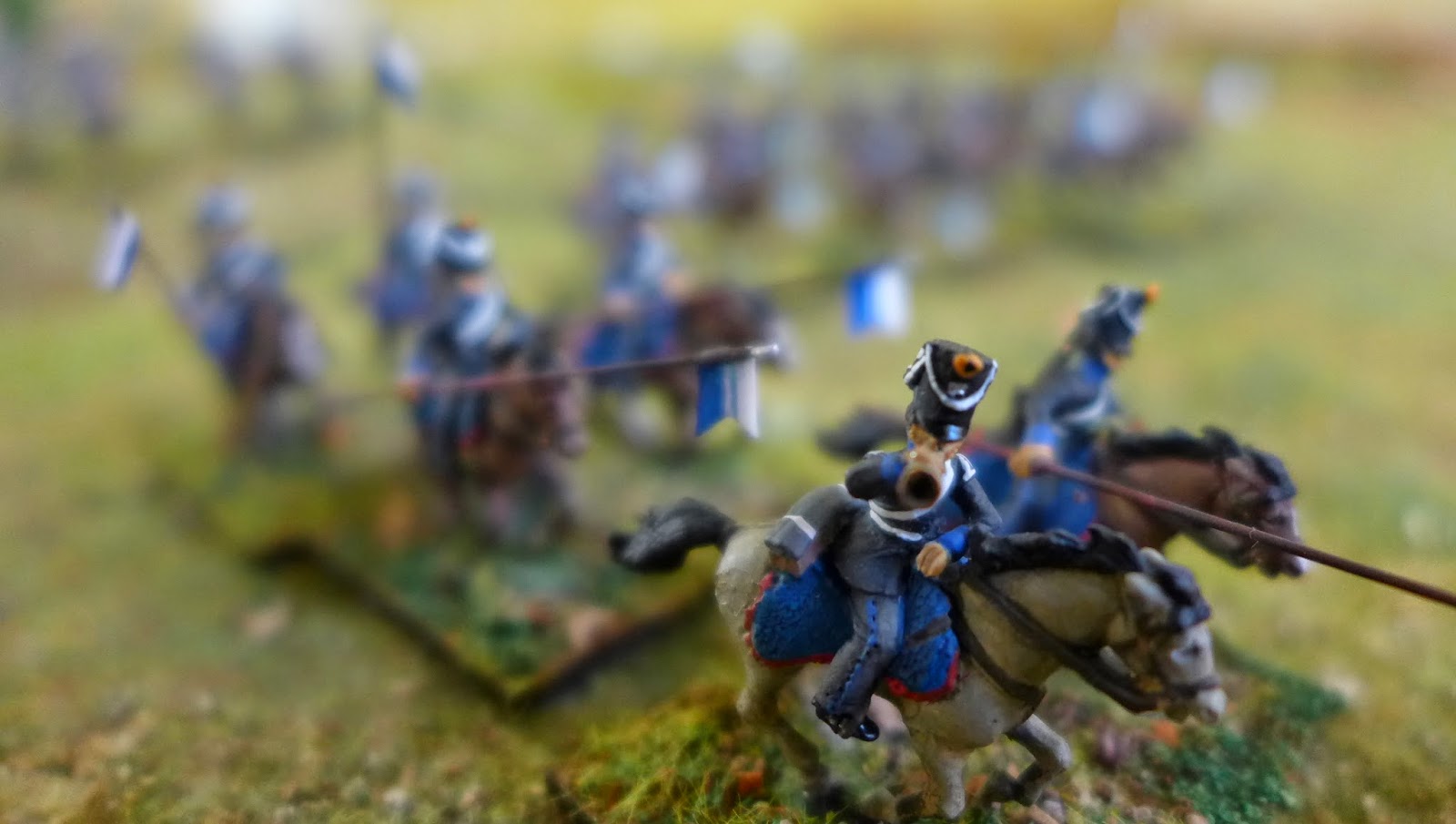 Now, straight out of the Osprey Reference - the St Petersburg Cossacks.

We are still dealing with 15mm here, so the crest detail on the shako is  "good enough" for this scale. (at least for my eyes) Its a Prussian style death's head in Silver metal .. as opposed to the brass plate on my other smartly attired cossacks.

Another little thing I have been doing lately is adding a few small touches of gloss varnish after the main coat of matte varnish has dried. You can see on the above image that this works pretty well to highlight the Shako visor, and the boots.

I basically apply it to all Shako visors, boots (esp officers), and some leather equipment such as scabbards or the ammo pouches on Guard units. Its a simple touch that (I think) adds a lot to the figure. Worth a shot anyway. 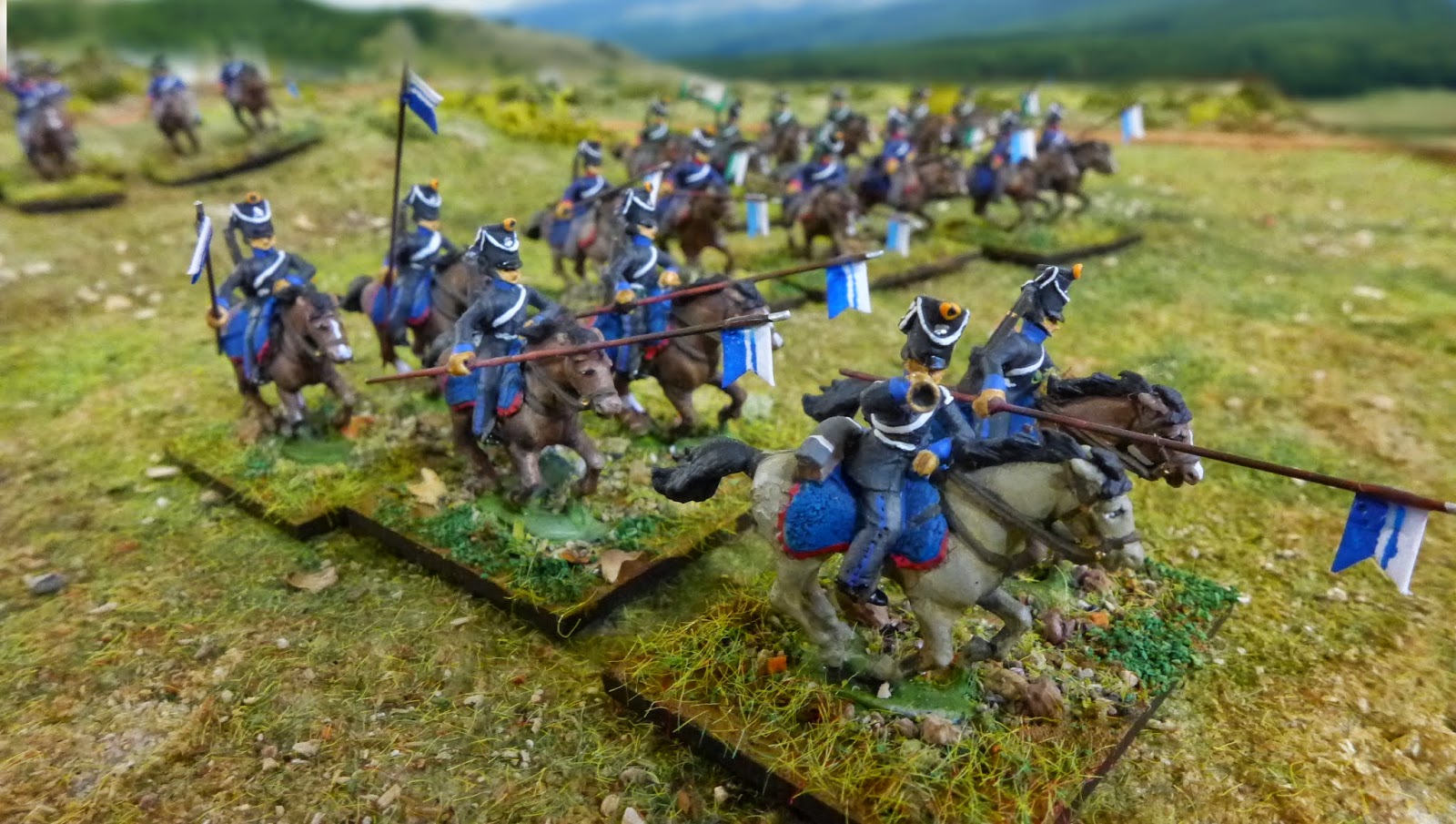 Trumpeter on a grey horse, as was the custom where and when the horses were available. 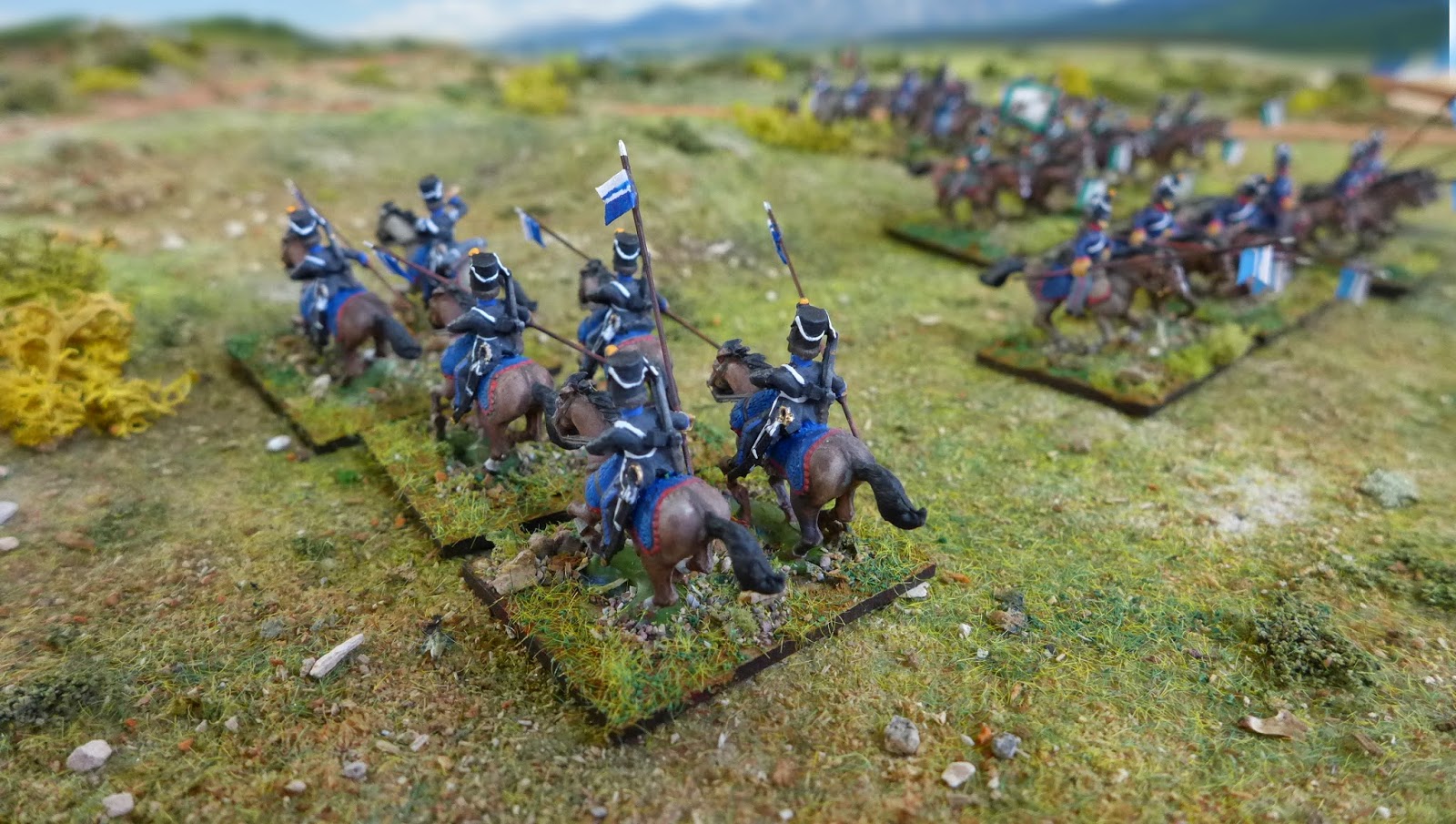 A mass of smartly attired cossacks.

Irregular Cossacks, Bashkirs, and other Tribal  Cutthroats in the service of the Tsar.  Stay Tuned