Regiment of the day 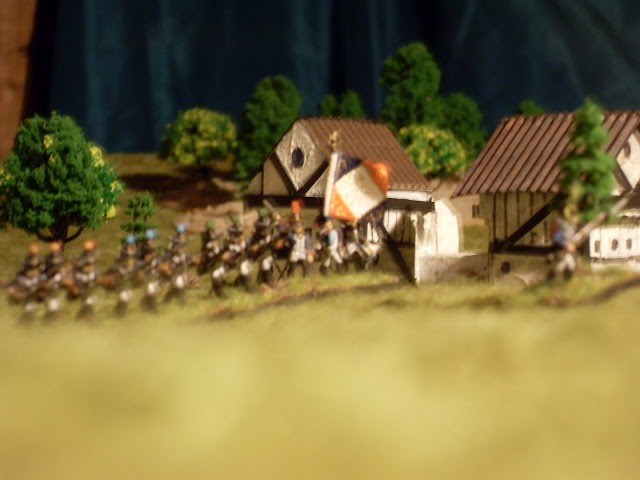 Today's regiment is the 17th Line, which formed part of the 1st division of III Corps.


Each 3 figure base represents around 550 men - 1 battalion at combat strength, and the 30mm infantry base frontage represents approx 100m frontage.

The figures are from the French napoleonic range of warrior miniatures. These are 'true 15mm', and quite a bit smaller than ABs or other 18mm 'standard' figures. 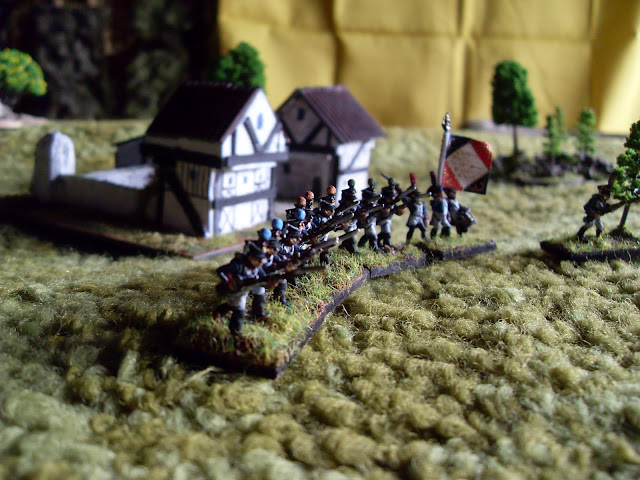 Having said that - the detail on them is very crisp and clear where it counts (shakos, faces, equipment packs), and the anatomical proportions are acceptably good.

The sculptor has gone for very deep creases and recesses on packs, boots, cuffs and turnbacks. The musket details are clear and exagerrated as well. Equipment straps are very much raised off the figure and are easy to paint. 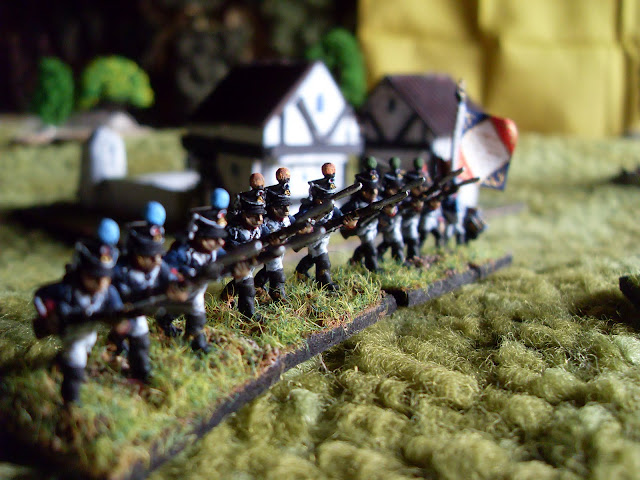 Facial features are pretty clear, and its a face that responds well to a glaze - picks up all the right shadows and looks like a warrior's face after 1 coat.

There is only 1 variation on the pose - a fairly realistic advance attack pose. I like that, and it gives the unit a bit of an uniform old school look reminiscent of old minifigs armies (but more realistic) 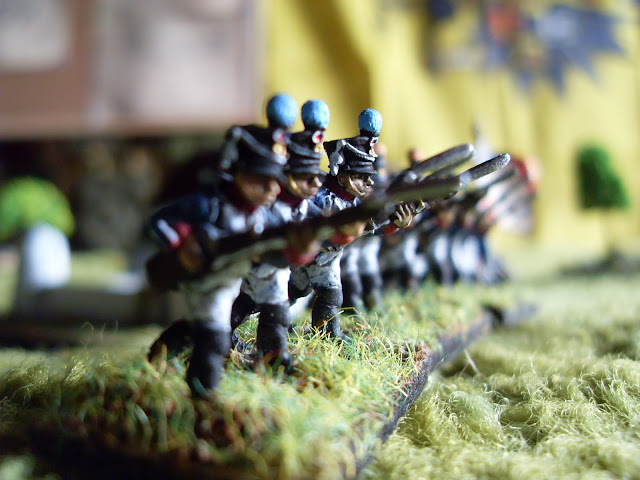 Ive gone for a generic look with this unit - parade ground uniform with uncovered shakos, standard command base, and a voltigeur with a green over yellow plume. 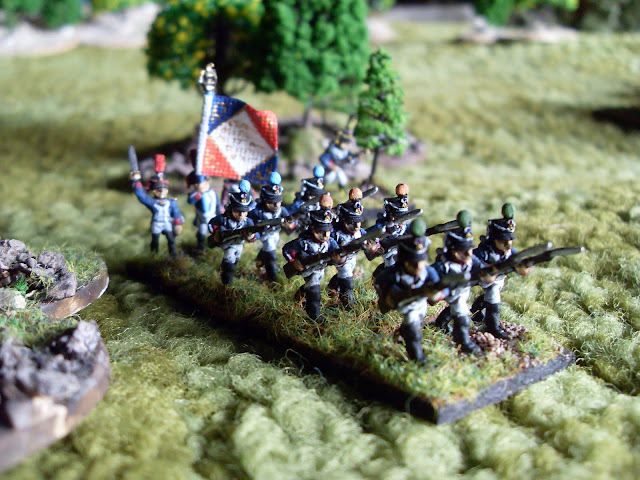 These figures painted up pretty quickly (1 day from start to finished), and were a lot of pleasure to put together. Since they are so inexpensive to start with, and certainly quicker to paint than the larger 18mm figures ... the whole exersize is very satisfying. 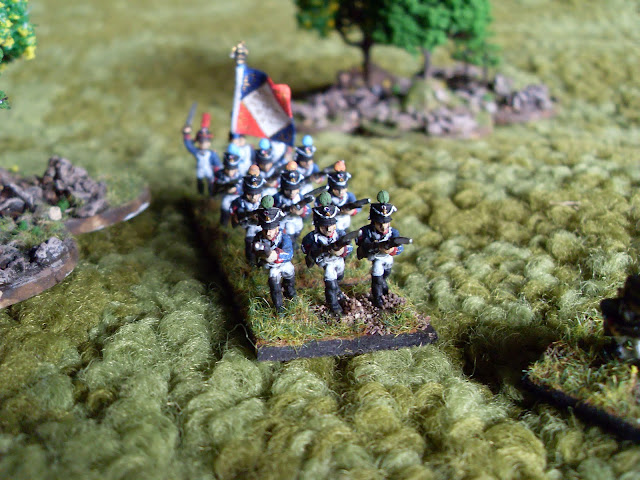 I do love large and exquisitely detailed minis (I have a few of these to go in this project), but there is also something enormously satisfying about having something finished as well. 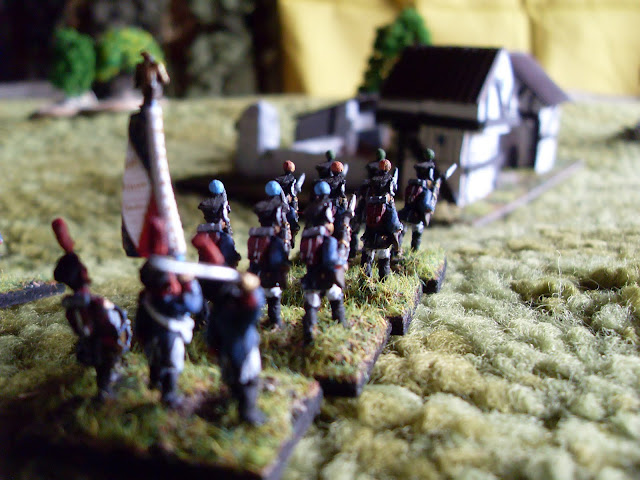 Thanks to warrior minis, I should have a large mass of finished, and very presentable figures to model the entire Wagram 1809 campaign ! Including the French, Austrians, Bavarians, and other associated irregular and allied units - thats something like 600 bases of figures to be done yet, and thats just Wagram. 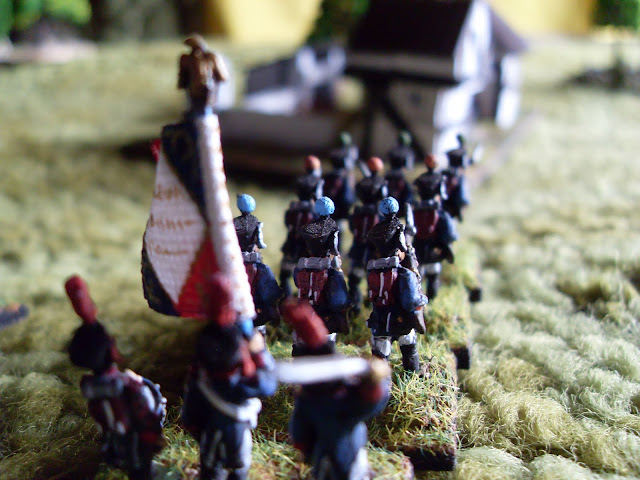 I dont even want to think about Leipzig/Dresden 1813, Jena Auerstadt, Eylau, Borodino, Bussaco, etc just yet. One battle at a time, one regiment at a time, I might just get there.

Go really light and faded, and let the glaze do the job. Works for me.