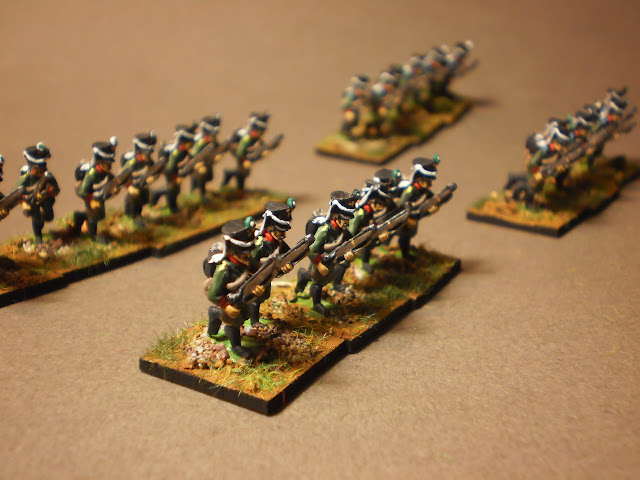 I better get this thing Napoleonic before we get way off track.

Here is a quick one then - some 1812 Russian Jaeger Battalions. 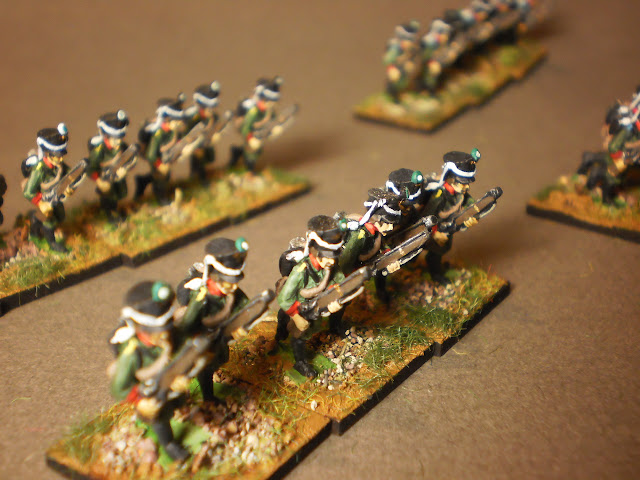 Digging through the vast appendix of the  Revolution and Empire rules, we find the following stats for the Russian Jaegers in the 1813 campaign in Central Europe (which includes Dresden / Leipzig of course)

So these are the stats that Im using for these units in the computer moderated system :


Happy to discuss the accuracy of those stats, or talk about variations if you like.

During the 1812 campaign, many Jaeger Battalions would have been closer to full book strength, so anything from 6, 8, or 12 figures would be suitable for a Jaeger Bn depending on the campaign.

By the time the Russians limped into Leipzig in 1813, the state of the units was well below par.

An interesting note here is the variation in gradings for these Battalions. They are quite a mixed bag in this case.

When a new game is created, the scenario details how many Jaeger Battalions are assigned to which Brigade and Division. The computer will then randomly assign each individual Battalion to one of the specified Troop Grades in the ratio assigned above.

As a player / commander, you cant control this .... but you can take what you are given, and re-organise your screens and reserve lines to accommodate the variation in troops. 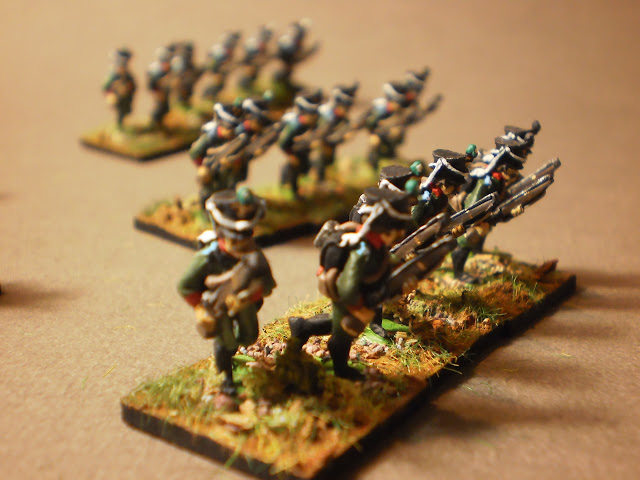 Jackets and trousers in the standard Russian Military Green.  Im using vallejo "Olive Grey" for all my Russian field troops on campaign, and "Military Green" for officers and cavalry.

Despite the name, the colors are actually quite close. The Olive Grey is slightly more faded, and suitable for the average Soldatnik. 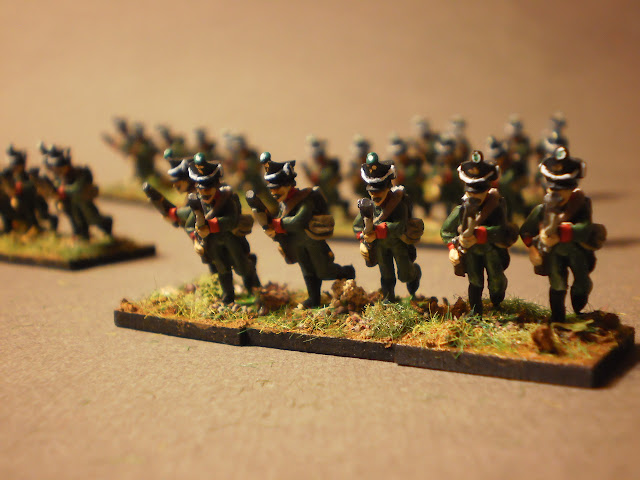 All facings are now red  (compared to the earlier Jaegers with a variety of regimental facings).  Different companies and Battalions are only distinguished by shoulder straps and pompom variations now. 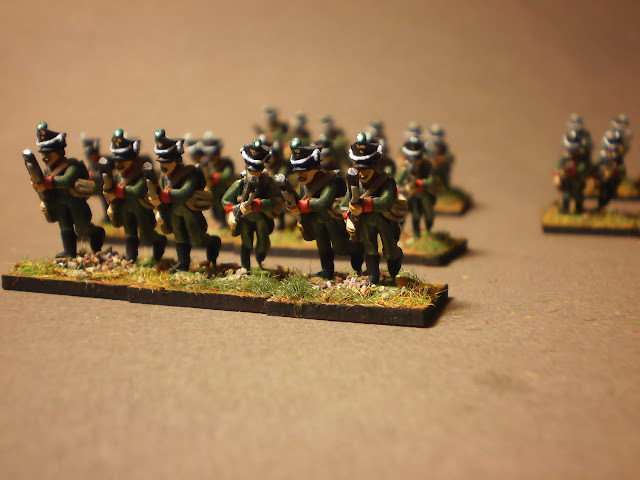 On the tabletop though (or packing up after a game with a stack of casualties) .... they are very hard to tell units apart.

Ah well - they do the job quite well, and you need LOTS of them to do the Russians properly.

Each Russian Infantry Corps is the equivalent of a good French Division, and generally has :

- 2 Infantry Divisions.  Each Division has 2 - 3 Brigades, with the leading Brigade typically providing a handful of Jaeger Bns.

Figures here are all Lancashire Games from their 15mm range. These Jaegers are on the large side for 15mm, and sit well with AB sized figures.

The castings are pretty clean, and the sculpting style is chunky-good with easy to paint raised details.

You can get em in "Battle Pack" bags of 60 figs for 15 GBP, or 10 figs for 2.60 GBP.  There are no separate Jaeger Command packs, so you might want to throw in some extra officers and horn blowers from the spare parts box if you want. 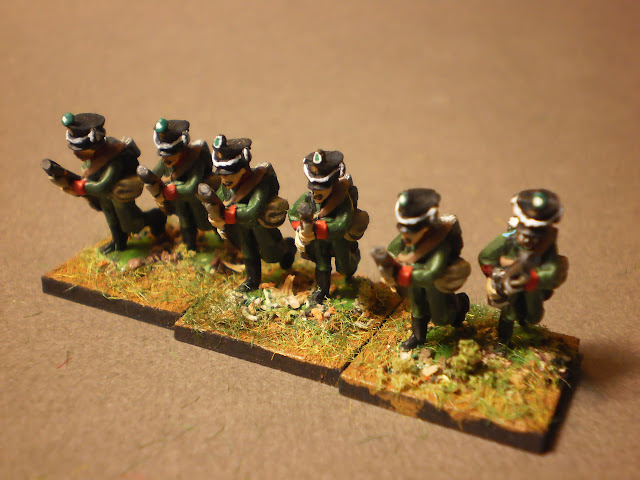 Lets have a quick tour through their Drill Book options for these units : 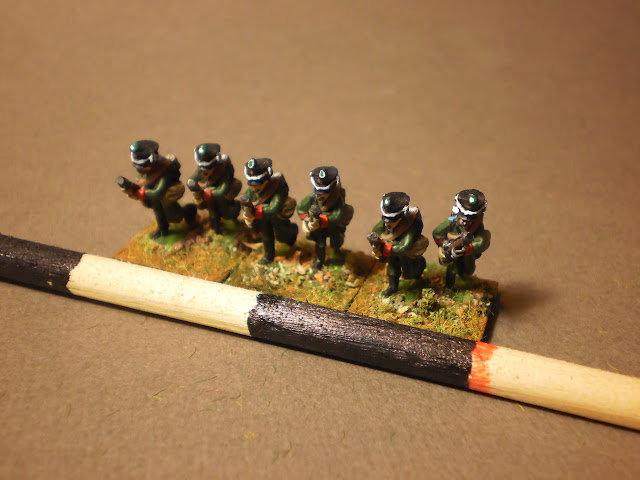 At their depleted battalion size of 6 figures, they take up 2 BW frontage, or 100 yds. 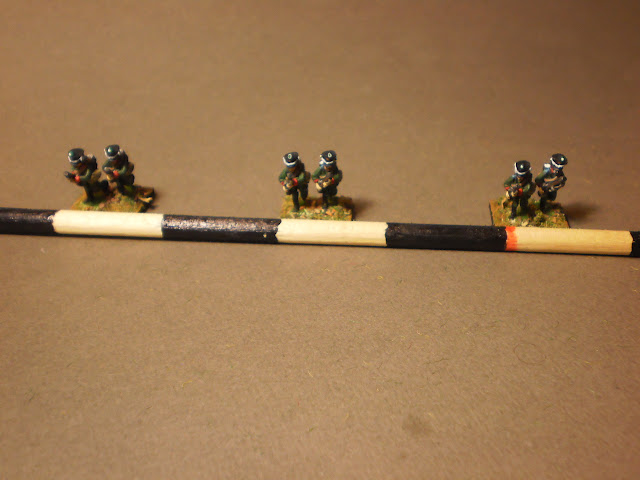 Under this command, the whole Battalion is capable of breaking out into open order. (aka 'Semi Skirmish Order' in Empire speak)

Super simple - in Open Order, each Base of troops can take up double the normal frontage.  Using the parade ground stick (which is divided into standard BaseWidths), each company in the Battalion is aligned on the white block ....


Open Order is good for minimizing casualties from incoming fire, but is still classed as 'ordered'. The men are still holding a thin line, and remain under tight control.

If disordered whilst spread out in this way, the unit basically falls apart, and must be reformed before it can accept any new orders. 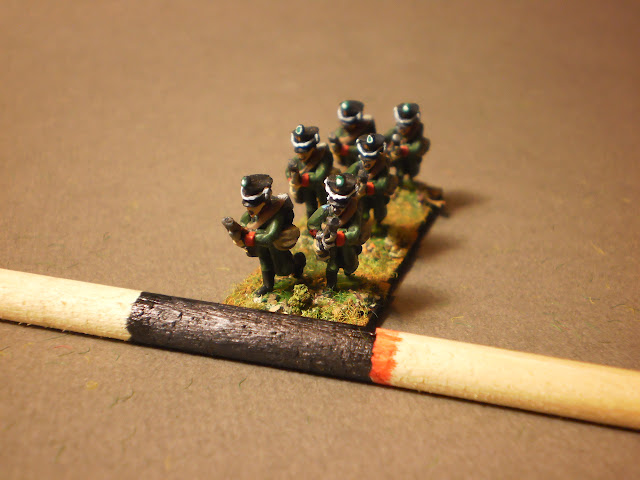 Under this command, the Battalion is simply placed in a column, 1 company wide. Easy to control, and moves at the quick march pace through any terrain without falling apart.

The bases are touching, which denotes that the unit is in closed column. This gives some defense against cavalry, but makes the unit horribly vulnerable to artillery fire ! 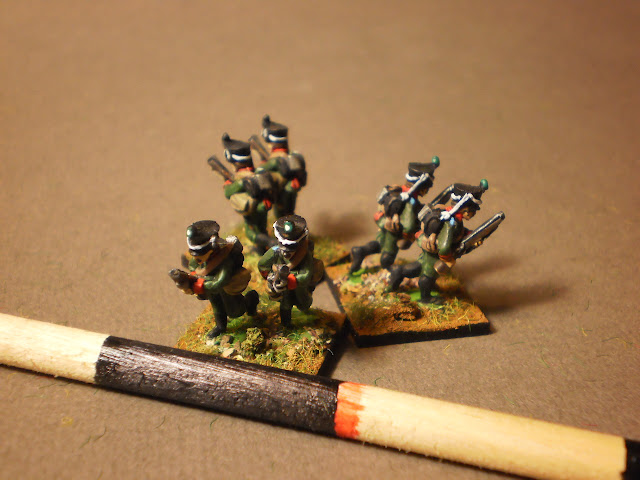 Under this command, the Jaegers can take a defensive stance against enemy cavalry.

This represents either a full Battalion closing a circle, or a tight collection of Klumpen with mutually supporting fire.

There is no option in the drill book for full square for these units (nor some of the more exotic formation orders ... which we will look at in future posts for sure)

So there you go - Simple, cheap, rugged and effective. Russian Jaegers.
Posted by Unknown at 04:06