Campaign System Ideas - the Rule of 3

Thoughts of the Day 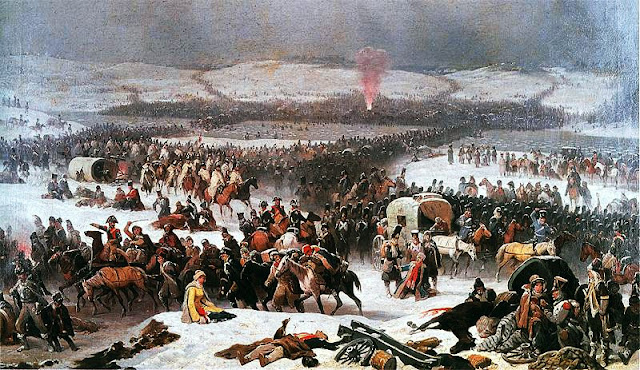 Some ideas here on extending the computer system to manage campaigns.

Handling the logistics and fog of war is one important aspect, and that is all covered quite well by best practices in this area.

Its the 'game' aspect that is a really hard call. A campaign that is done with full realism would tend towards becoming pretty dull pretty quickly, as a couple of decisive battles turn an even contest of a campaign into a simple mopping up and exploit operation. Not much fun in that.

Here are some psuedo-historical, but gamey ideas that might be worth playing with for a campaign system :

I think the rule of 3's might be a good starting point.

Have the campaign track 3 different type of 'Victory Points' for each player, so there are 3 leaderboards for the players.

To win the campaign, you need to achieve a clear win in at least 2 categories.

This leads to some simple rock-paper-scissors strategic considerations, that can get beautifully complicated and immersive.


Military Victory Points - are simply awarded for destroying the enemy.
You can ONLY win military victory points on the tabletop.
1 point for every 1000 enemy killed.

Political Victory Points - are awarded for a variety of things, as described below.  You cannot win political points on the tabletop, but you can easily lose them.
-1 point for every 1000 of your own troops killed.

Glory Victory Points - are subjectively awarded for a variety of things, as described below.
Variable

All States start the game with a Peace Treaty in place with all other States, unless otherwise specified in the campaign briefing.

Al States start  the game with no Alliances in place with any other States, unless otherwise specified in the campaign briefing.

Each state begins the campaign with a number of Military, Political and Glory points, as defined in the campaign briefing.

Where the campaign rules call for points to be spent in order to achieve some objective, then the player must have sufficient stock of points to achieve this.  (ie - you cannot go 'into debt' on political points).

This can become strategically important.

Alliances are formal pacts between 2 or more player controlled States. Any number of States can form an Alliance. A State may only be a member of 1 alliance at a time.

The campaign briefing may specify that some particular pairs of States may never enter into an Alliance during the course of the campaign.

Joining an Alliance, or dropping out of an alliance can only be done by spending Political points to complete the paperwork. The cost in points is a function of the size of the alliance.

To join an alliance, all members of the alliance need to spend (10x size of the alliance) points to admit the new member state .. so all alliance members must agree, and spend the points.

Each objective city is worth between 1-10 political points per month that it is held, depending on the importance of the objective.

Where an objective is held for a turn, then all members of that alliance equally gain the political victory points associated with the objective.


Alliances and Victory Points from Battles  :

If both players in the alliance fought the battle, then the 10 military victory points are split equally both ways - 5 each, regardless of how many kills your forces actually made.

If you study the above effects, you will see that being in an alliance is seriously a 2 edged sword in political terms.

Battles require that 2 players who fight on the same table on the same side have a formal alliance in place before entering the field.

Battles require that sides be formally at war in campaign terms in order to fight.

Making a declaration of war does not require the consent of the declaree.

The player who has war declared against them LOSES 10 political points.

If a war is declared against a member of an alliance, then consider that as a series of declarations.

A Peace Treaty is a formal declaration between 2 States.

A formal peace treaty is required in order to move troops through another's territory.

A peace treaty between 2 states dissolves any declaration of war between those 2 states.

Peace treaties between a state which is a member of an alliance requires a peace treaty with all other members of the alliance.

ie - if Austria-Russia is an alliance, and France wishes peace with Austria, then it must sign a treaty with Russia as well.

The player who offers a peace treaty to a state COSTS 10 political points, whether it is accepted or not.

The player who accepts a peace treaty GAINS 10 political points.

There are no points gains by receiving a peace offer, and rejecting it.


Note - remember that a player cannot go into debt on political points. If everything is going wrong for a player, and they have a negative political points total, then they do not have enough political clout to even sue for peace with other States.


In order to discourage players from resigning, the following penalties apply to all players whenever one member of the campaign resigns their position, or otherwise drops out of the game : 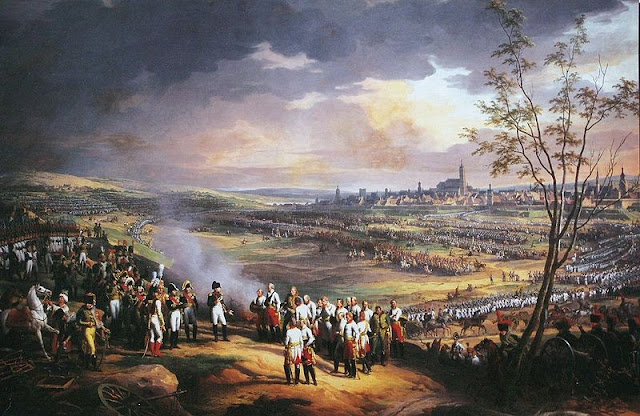 In this campaign, the Austrians, Russians and Swedes are currently in an alliance. Prussia and Denmark are in another alliance, and France is doing it alone.

On the leaderboard, the French are miles in front on the military victories, but it is the Austo-Russian-Swedish alliance that is dominating the political board.

Prussia and Denmark - having taken a beating early in the campaign, are avoiding too many tabletop actions these days, sitting it out safe and waiting for an opportunity to rise again.

Which brings us to the battle of Krookwurst, where a massive combined Austrian and Russian army takes the vital trading port of Krookwurst from the defending French. Krookwurst is worth 2 Political points per campaign turn.

At this stage, you can see that the French might clearly have the great military leader, but they are losing the political game.

Sweden is sitting it out, conserving their small strength, and waiting for Bernadotte to change sides.

You can also have players decide to prudently drop out of alliances if other players are getting hammered on other table tops .. weakening the whole alliance by sharing the political fallout from lost battles.

In the above example, Sweden is copping political fallout from the terrible losses that it's Allies are sustaining, but its worth staying in the alliance as it is gaining political points each turn now for being part governing forces of Krookwurst. 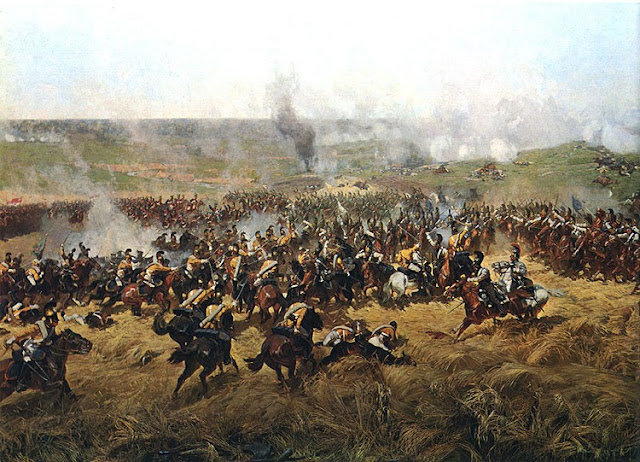 The Battle of Bockenbeck
In the next month of the campaign, the French setup a counterattack against a weakly held Austrian objective at Bockenbeck, and take it easily with minimal losses, killing another 15,000 allied troops.

On the news of this defeat, Sweden finally decides to drop out of the Alliance and join the Prussians and Danes.

To do this, Sweden needs to spend 30 points to exit the Alliance, and another 20 points to join Prussia and Denmark.

As a result of the French counterattack at Bockenbeck, Austria and Russia both take -15 political points from battlefield losses, but also suffer another -30 political points for Sweden's exit from the Alliance.

On top of that, Prussia and Denmark also drop -20 political points for taking on a new alliance partner.

As a result of the alliance reshuffle, the once Grand Alliance of Austria and Russia is now neck and neck with a resurgent Prussian-Danish-Swedish alliance ... and thanks to all the court intrigue and backstabbing, neither of these alliances are that far ahead of the French anymore.

This minor engagement of Bockenbeck on the tabletop has huge implications on the campaign leaderboard. 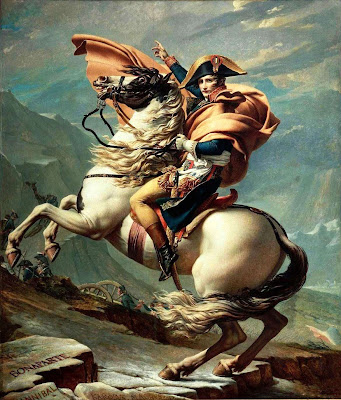 These are subjective awards determined by the umpire, who can dangle them like unexpected carrots from time to time in order to balance the game.

In a battle where some units perform a particularly heroic deed - that player can also be awarded arbitrary glory points by mutual consent of the players at the table.

An example of Glory points:

In our example, the French are cleaning up on the military leaderboard, but it is now a shrewd Sweden who is topping the political leaderboard.

Denmark on the other hand is holding the wooden spoon on both leaderboards, and is losing interest in playing the game. Nobody wants Denmark to drop out of the game, particularly the Prussian or Swedish player, as this will cost them political points if Denmark resigns.


So every time that the Danish troops take to the field in a battle, the allied Prussian player will most certainly appeal to the umpire for every action of the Danes to be considered for a glory point award.

The opposing French player would likely agree, no matter how mundane the Danish actions are .... since boosting the Danish Glory dilutes the opportunity for the Austrians to win the Glory point leaderboard.

Unanimous player appeal = probable Glory point award.  Denmark gets bribed with Glory points to remain in the campaign, fight more battles, and still be in with a chance of winning the campaign through subterfuge alone.

Injecting twists in a Campaign :

If a campaign is getting a little one sided, the umpire could then declare something like :

"20 miles to the West of Saalfeld, where an engagement is looming, the convent of St Hildegaard has been beset upon by armed deserters with evil intent. The mother superior pleads for the commanders to send a force to defend the nun's honour in their hour of need. 50 Glory point on offer for destroying the force of deserters."

The unlucky players can still have a decisive part in the campaign by force marching whats left of his forces to the convent, thereby claiming the Glory points. This will lock the campaign up, so that neither of the other 2 groups of players can achieve a clear result of winning on 2 leaderboards.

One of those groups (either the military champ or the political champs) then need to make some serious negotiations with the unlucky players in order to win the campaign. Makes them suddenly a very important players in the grander scheme of things.

Now, a commander who needs a decisive win at Saalfield might ignore the Nun's plea to concentrate on their own military and political victory on offer at Saalfield.

However, they may still decide to get involved in the mess at the convent  of St Hildegaard in order to deny other players from winning Glory by saving the Nun's honour.

If everyone jumps in, then the convent situation could end up turning into the 'Battle of the Nations' - which on the surface is all about protecting a Nun's honour, but in reality is a callously calculated political action.

It says nothing about the nitty-gritty details of managing the logistics of moving armies, or of dealing with command control and fog of war over vast scales of time and distance .... since those aspects are already well understood and can be modeled objectively.

Adding a 3-pronged points system similar to the above may be just one more way of making the campaign interesting and immersive, whilst keeping a campaign full of twists, turns and surprises.

Of course, adding the above level of detail to a computer operated campaign system is trivially simple .. once the nitty-gritty logistics part is handled accurately.

I think this could lead to a pretty cool looking user interface as well.