Vauban Fortification for the tabletop 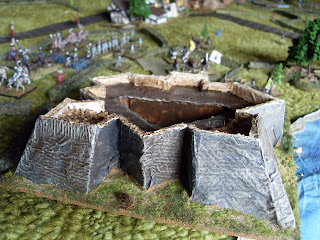 Today we look at simulating a small city on the tabletop that uses the Vauban style fortifications.

Sébastien Le Prestre de Vauban (1633-1707), is considered one the of the greatest military engineers of all time. In his life he was responsible for the fortification of over 160 places in France, however his major contribution to warfare was his methods of attack, which revolutionised siege warfare.

In his life Vauban had revolutionised the way sieges were fought, and he had fortified over 160 places for France. His deepest concern was always for the lives of the soldiers he commanded, and he was courageous, being wounded several times. Vauban wrote a series of papers entitled "Les Oisivetés" or "Leisures". These were on a diverse range of subjects including privateering, agriculture, canals and geography.

He was a skilled mathematician and a great engineer, but the last words should go to Vauban himself:
When I have a good look at myself I find I am still only half an engineer, after forty years of hard work, with the greatest experience. - Vauban"

That  describes all the steps needed to build an excellent model of such a fortification for under $20.

Using foamcore and a few tricks, this is not totally simple job, but it can be done in an afternoon with a little patience.

Here is my quick attempt at doing a fortified town ...

Email ThisBlogThis!Share to TwitterShare to FacebookShare to Pinterest
Labels: Scenery:Accessories