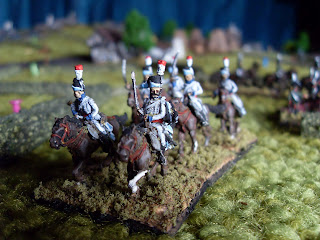 Today we have a small unit of rather elite cavalry - the von Trützchler Hussars, being part of the Saxon advanced guard division at Jena 1806.

On 14 October, the Saxon Hussars were behind the allied right flank at Vierzehnheiligen, attached to Grawert`s division. They were in action repeatedly under command of GLLT von Polenz and covered the withdrawal. They later crossed the River Ilm at Weimar.

No comprehensive Saxon casualty lists exist for the 1806 campaign ... however, according to Friesen's "Versuch einer Geschichte des Königl. Sächs. II. Reiterregiments (pages 63-4), the regiment lost five killed and nineteen wounded at Jena (with some number captured, perhaps as many as eleven).

Napoleon himself was quite concerned about the enemy cavalry prior to this campaign. A scarcity of French cavalry, and the impressive reputation of the Prussian cavalry was cause for major concern for the Emperor to be. With the Saxon cavalry in particular, Napoleon is reported to have rated these the highest of all horse in Europe.

"For their cavalry alone, it would be worth negotiating a treaty with Saxony".