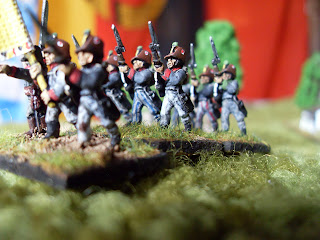 This one was inspired by my good friend Peter from Connecticut in the USA, (aka. Gonsalvo), who I have never actually met, but who operates a brilliant blog here :

Blunders on the Danube
Miniature Wargaming with an emphasis on the 1809 Campaign.

He has a very excellent collection of Austrian Landwehr in 15mm scale ... and to be honest, if I hadnt have stumbled across his extensive articles on Austrian Landwehr, then I probably would have skipped these units altogether
..... much to my loss !

But thats how this 'hobby / obsession' works I suppose.


I don't have a great deal of background information to add to these units - I recommend Peter's site above for that .. which is just as well because ... it's picture time instead.


On to the pictures - that's why we are here.

Hope you enjoy - there are several Landwehr units in the queue, and each one of them will give me the opportunity to do something a little different each time.


The history of the various types, uniforms, nationalities and battle honours of the Landwehr, Hungarian Insurrectio and Charles Legion units is a miniature modellers heaven.

Some figure manufacturers therefore make a huge variety of different figures for some of their Napoleonics range - a distinct figure for each distinct troop type within an army. Some other ranges offer a smaller variety of figures within the same army, and leave it to the artist / modeller to make the distinction between troop types.

Either way can be a good thing or a bad thing depending on how you approach it.

So if there is one thought I would like to leave with you - lingering in the back of your mind - is that it's OK to be a little daring with some units, and use the paintbrush in different ways to give the same figure a totally different look from unit to unit.

Looking forward to more soon.
Posted by Unknown at 00:02