Early next year - probably around March 2013 at this stage, I am running a reasonably massive convention / public demo game of "The Battle of the Nations" - Leipzig 1813.

Running at 1:60 scale in 15mm .... so at best we can probably look at fielding around a Corps+ for each of the armies involved (Russia / Prussia / Austria / Other Allied ) ... with at least 1 opposing French Corps on each table as well. Should be massive !

For the Prussians, I am going to concentrate on Kleist's Corps for starters.

On to the miniatures then - here are this week's recruits for Kliest's Corps : 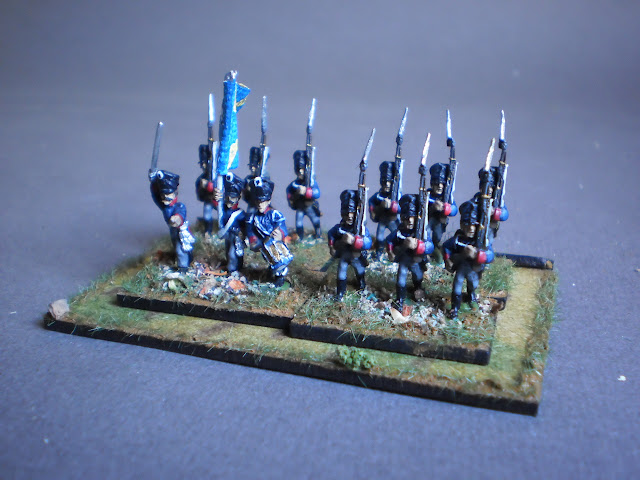 Each battalion sized unit is anything from 3 bases for some of the more understrength units (such as the Russians and some French) to 6 bases for the larger battalions (some Austrian units for example). 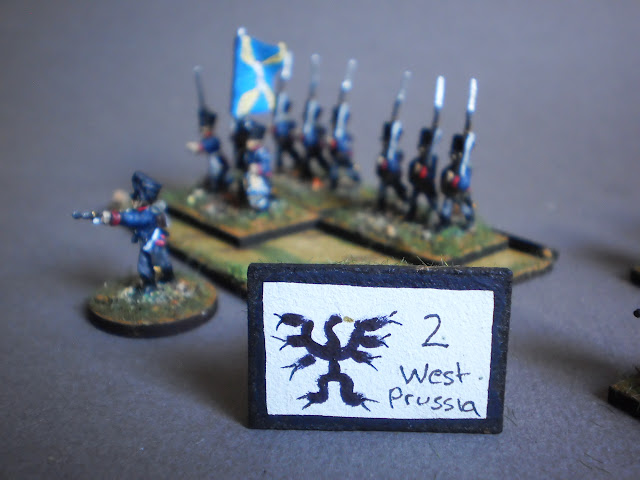 The Prussians are mostly 4 base battalions (12 figs). 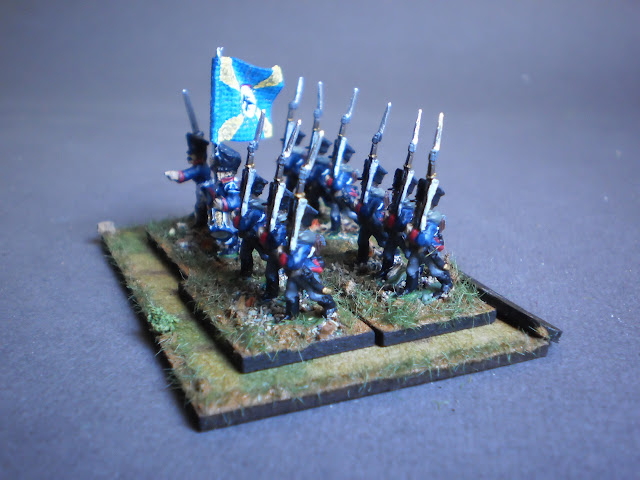 Each battalion will have it's own dedicated Battalion base, which includes name tag and embedded RFID tag to help with identifying the unit on the table.

Not sure what to call the 'Battalion Base' at this stage - looking for cool suggestions.

I like the sound of 'Launchpad' - but that doesnt sound very Napoleonic.

Maybe I should just call it a 'La Bricole' ? 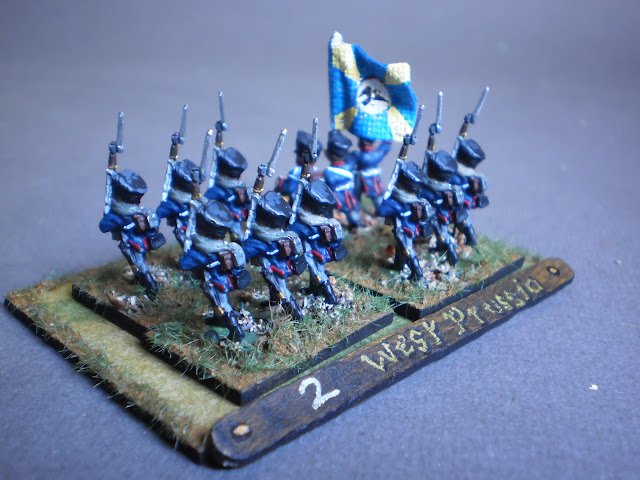 Each 'Bricole'  has a fancy name tag made from a wooden stick, hit with some wood stain and fancy lettering using a metallic pen.

Not as readable as laser printed tags with colour codes .. but I think this looks a lot more period. I like. 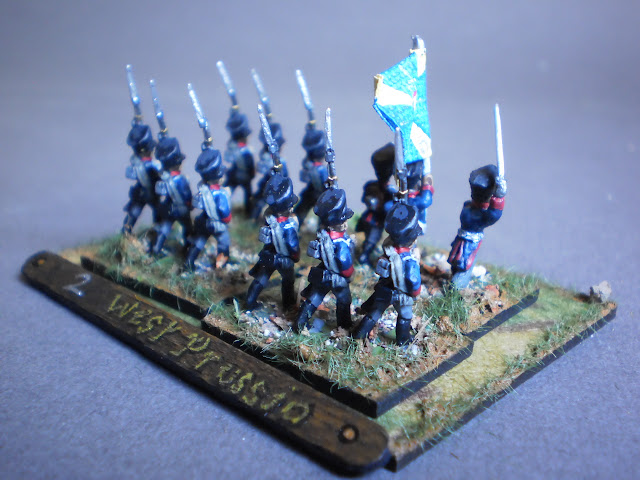 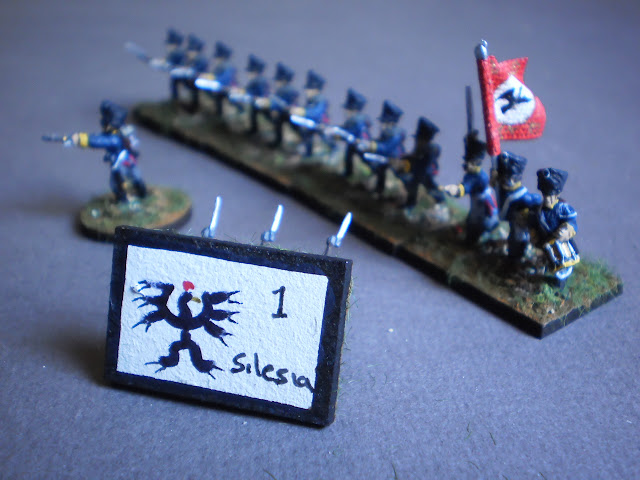 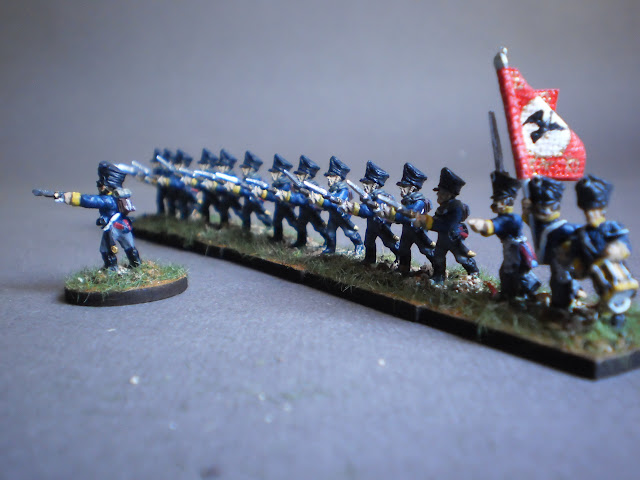 Stretch out in line formation, with skirmisher up front.

Prussian Regiments of this period have 2 Musketeer Battalions and Fusilier Battalion,

The standard deployment is to have the Fusiliers in semi-skirmish order extended line up front, covering the 2 musketeer battalions in closed column (Prussian attack columns).

If the Fusilier screen was not available for any reason, each Musketeer battalion was trained to deploy the 3rd rank forward as a semi-skirmish screen. 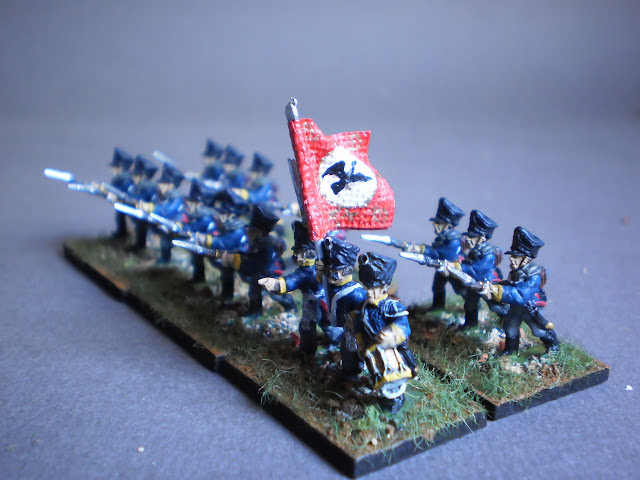 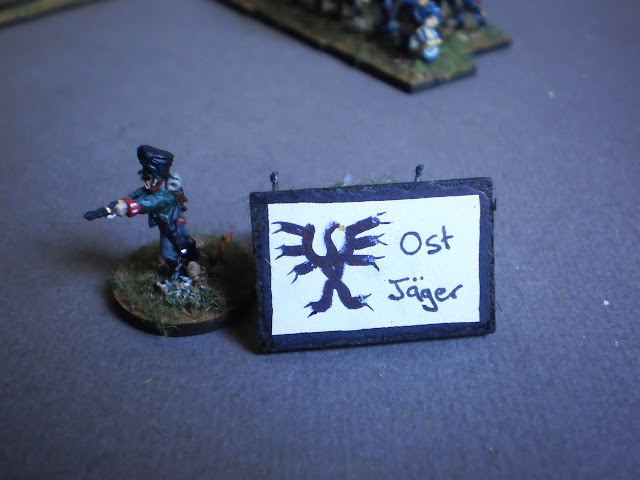 A company of rifle armed Jagers, from the OstPreussisches Jager. 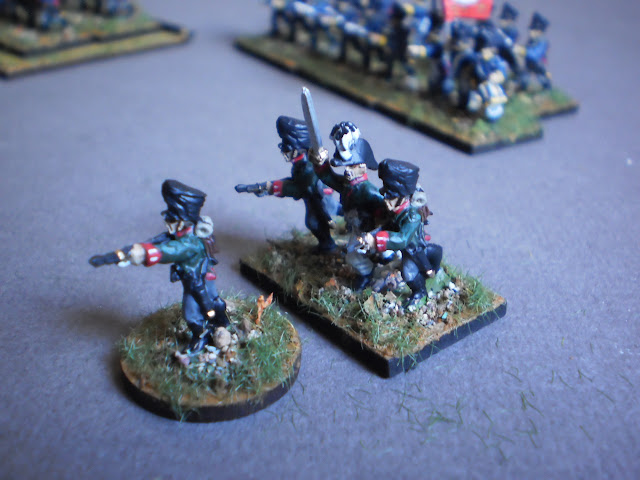 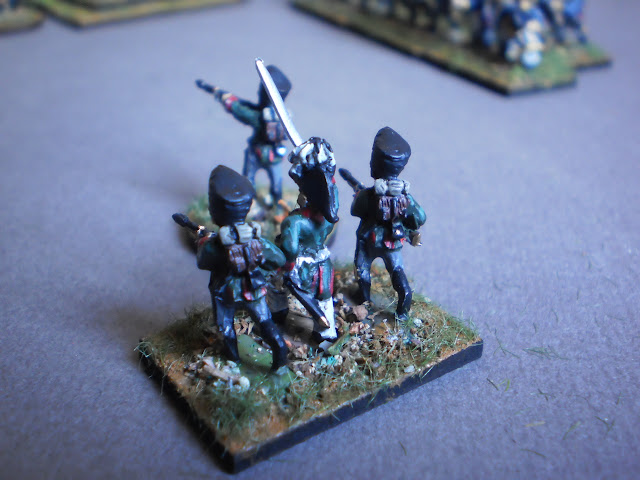 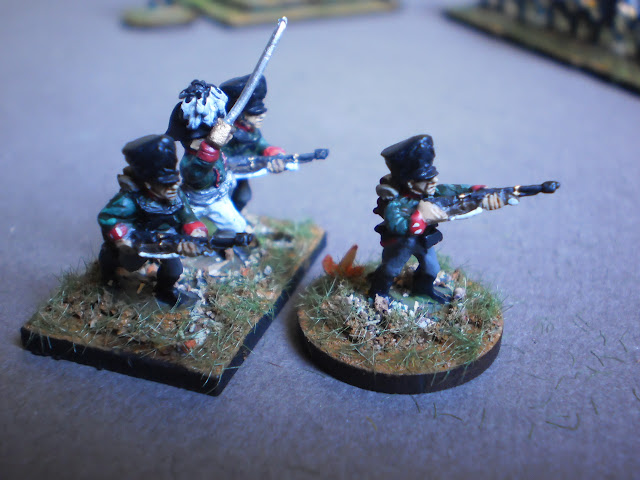 The Jager Officer is a pretty cool figure.

In case you haven't noticed - these figures are all the 'small scale' 15mm Warrior miniatures. Their Prussian range is reasonably comprehensive - good enough to model this army on a large scale for a convention game anyway. 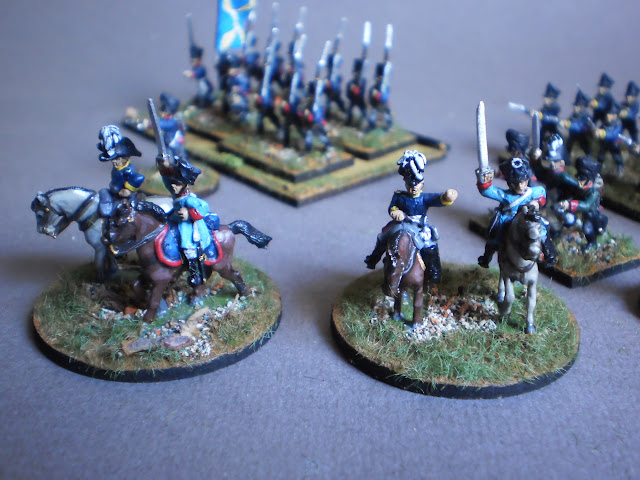 A couple of Brigade commander stands - each with 2 officers on a 30mm round base.  A 'Brigade' in the 1813 Prussian army consists of at least 2 regiments of infantry, each with 3 battalions, plus extra reserve battalions (incl Landwehr), and Brigade level Cavalry and artillery reserve. Thats a big Brigade - it is functionally equivalent to a Division in other armies, and so is treated as a Division as far as the rules go. 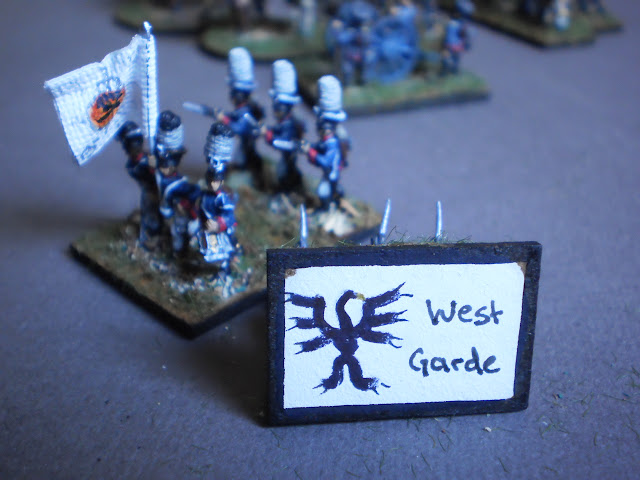 I still have a few Garde and Grenadier figures left over from the Army Packs - so throw in a few more Garde battalions.

There is no Garde in Kliest's Corps, but that is no excuse not to have some elite reserves in the Prussian forces ! 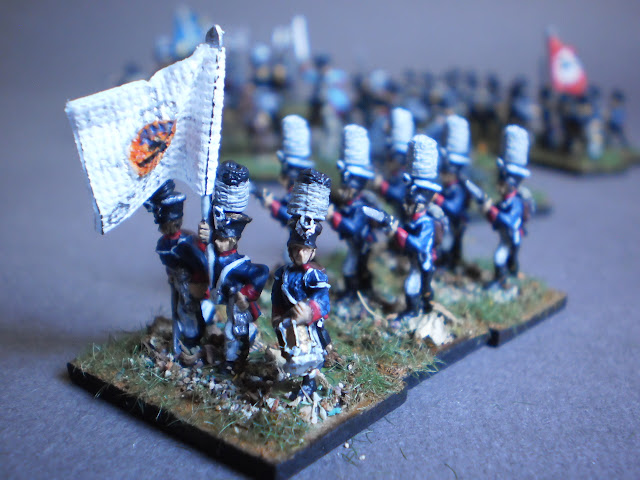 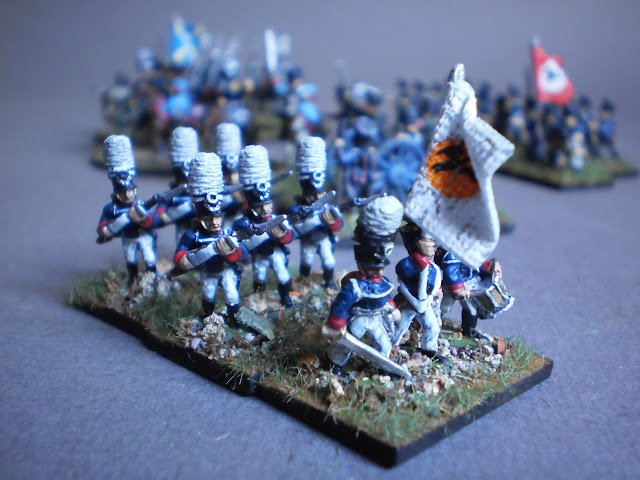 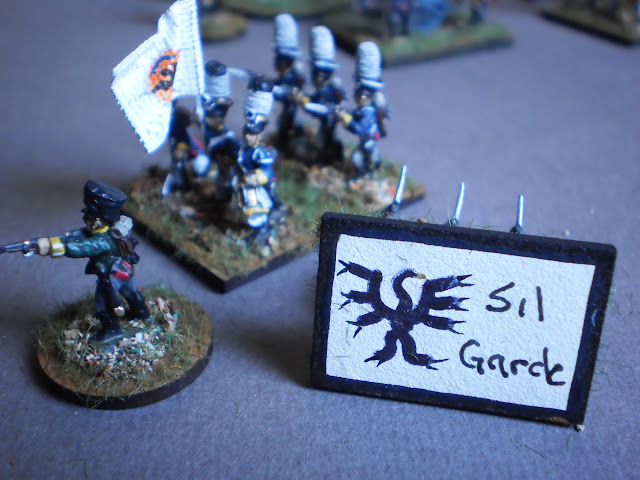 .. and some Silesian Garde as well. 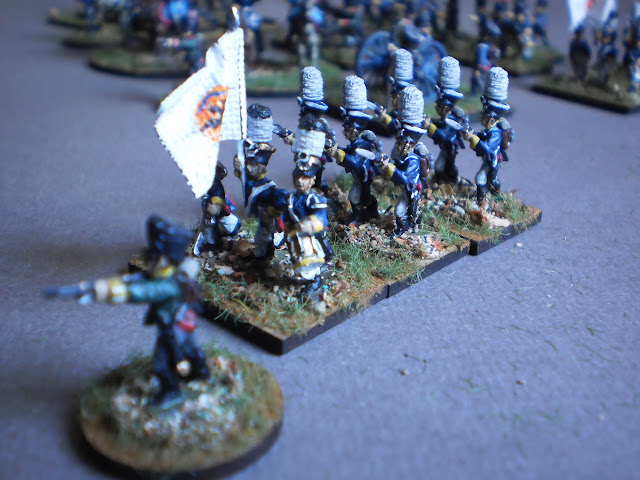 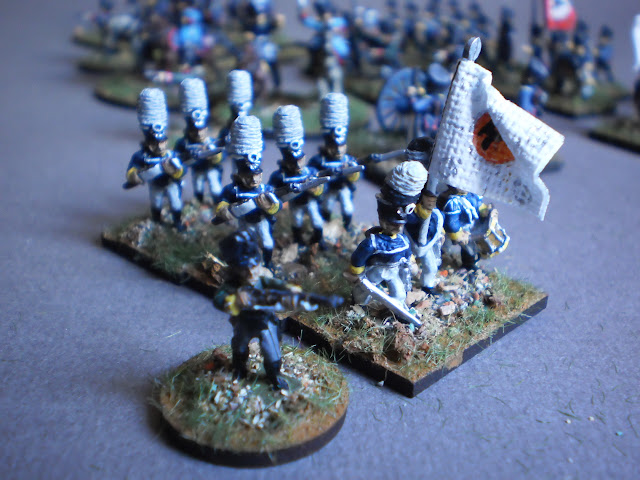 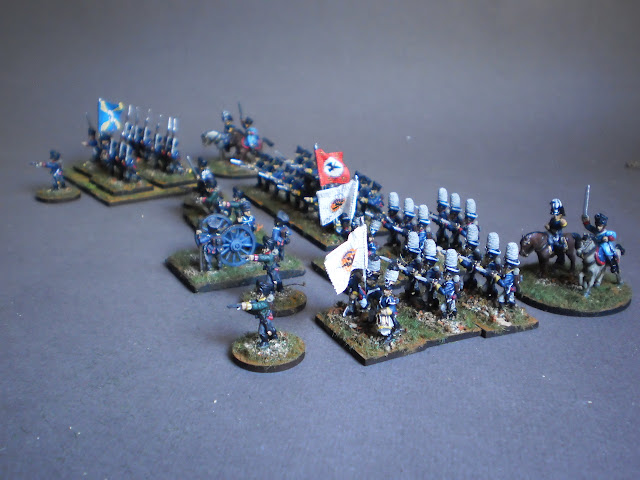 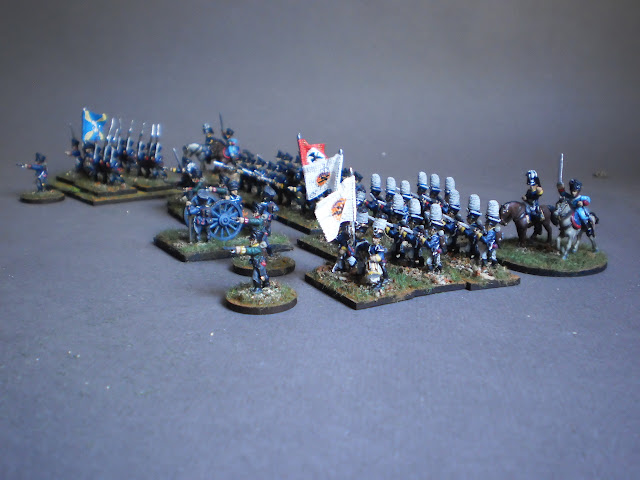 ... actually not a bad look when they are all bunched together. 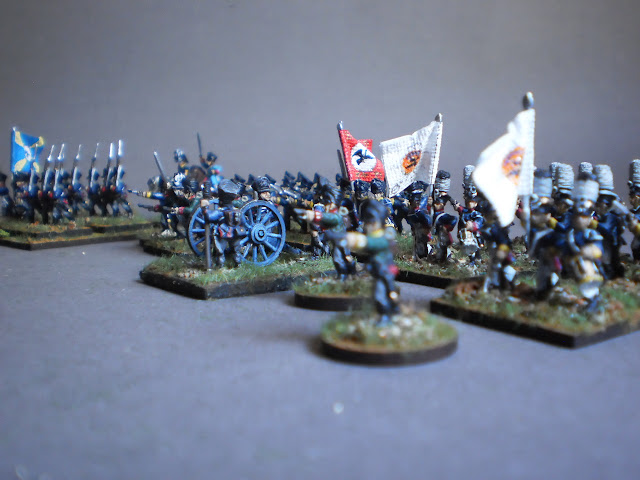 .. but I still need to multiply the above mass by a factor of about 8 ... just to do the Prussian contingent of the Russo-Prussian Corps !


And then there is the French as well !

Should be fine, mate.