Army of the White Citadel

Every 3,333 years .. the planets align in such a way as to bring into existence a gateway to an ethereal Kingdom known simply as -

From this White Citadel come warriors who are true of heart, and as brave as lions.

They fight against injustice and oppression, righting wrongs and rescuing damsels in distress .... before the planets once again begin to un-align ... and whereupon the White Citadel fades away for another 3,333 years.

They have been known to appear during several famous conflicts, such as :

This is their story. 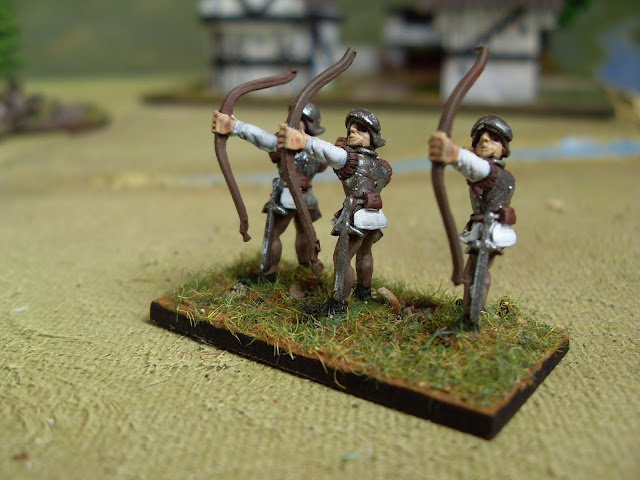 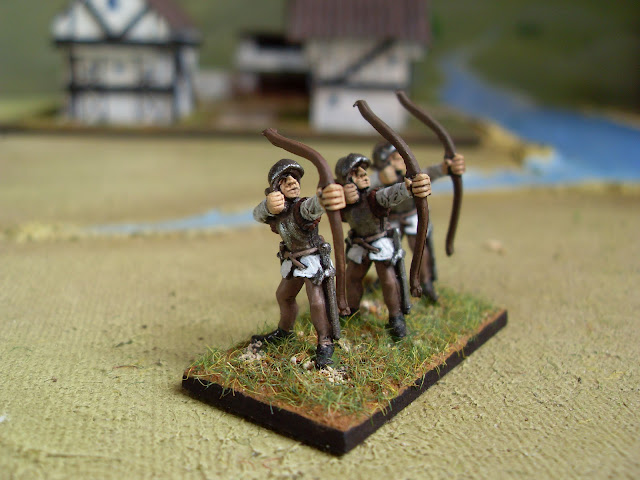 Leading the Advanced Guard of the forces of the White Citadel are the famous archers of honour.

Unknown brand ... part of a bundle of ebay finds. 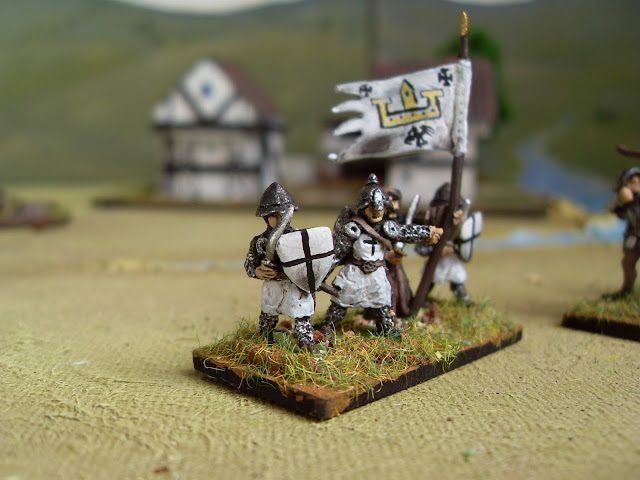 The White Citadel foot guard.  This is the foot command group carrying the banner of the (somewhat yellow looking) White Citadel itself. 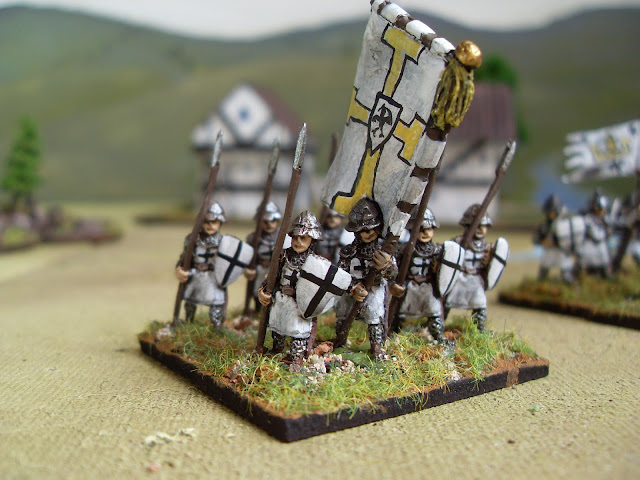 The Spearmen of the White Citadel, looking suspiciously like Teutonic foot, including the design of the banner. 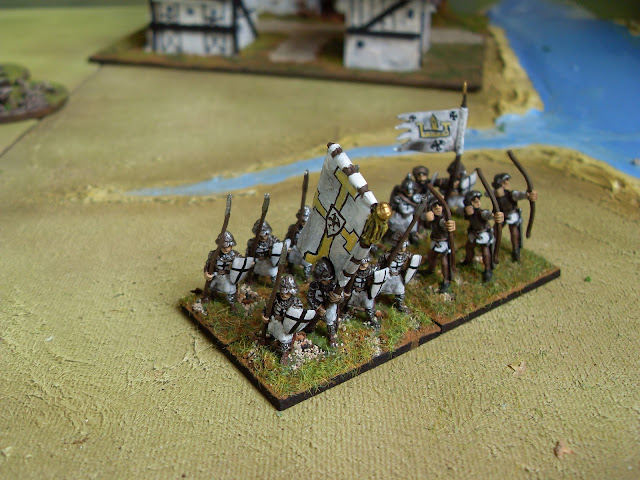 The White Citadel Grande Masse of Foot - with Archers of Honour in support. 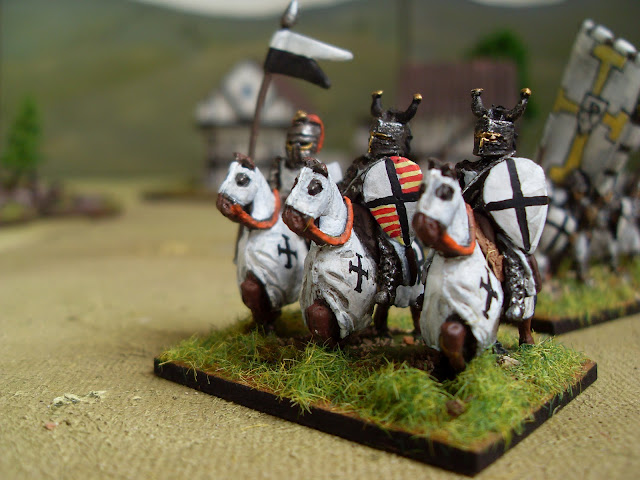 Painting these bought up a bit of a dilemma - prime light, and fiddle around for ages getting the darker colours in the recesses.

Prime dark, and fiddle around getting the white cloth opaque enough over the dark background.

I went for a dark rusty coloured black sort of mix for the primer on all these. That made it very quick and easy to get 90% of the figures painted, with a light dry brush to bring up the armour.

90% of the time was spent on getting 10% of the light parts correctly lined and shaded.  Cant win either way :) 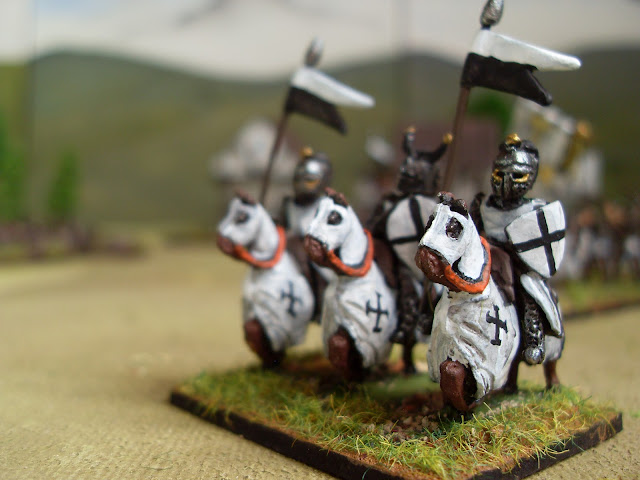 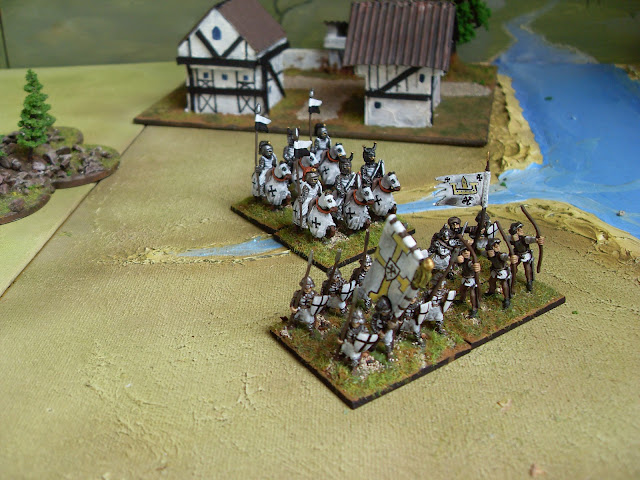 The Army of the White Citadel taking shape. 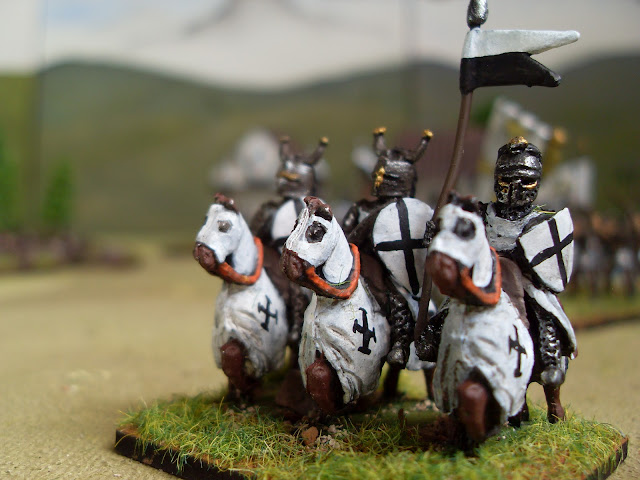 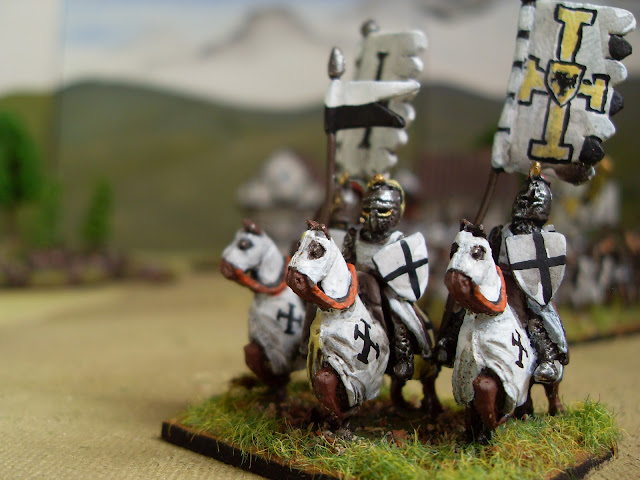 ... and another element of Knights ! 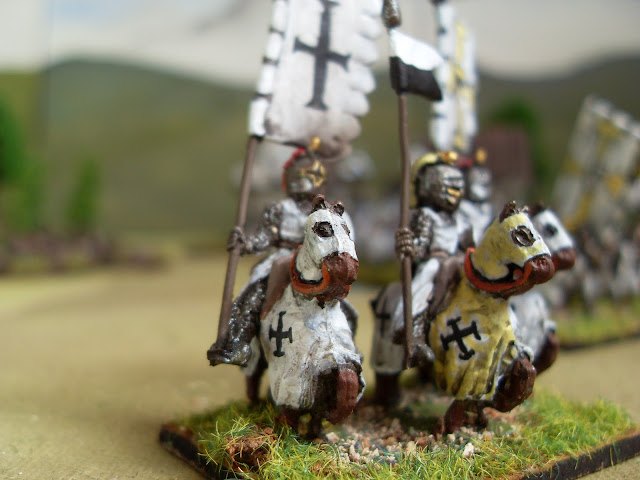 He is the guy in the yellow silk horse barding .. of course. 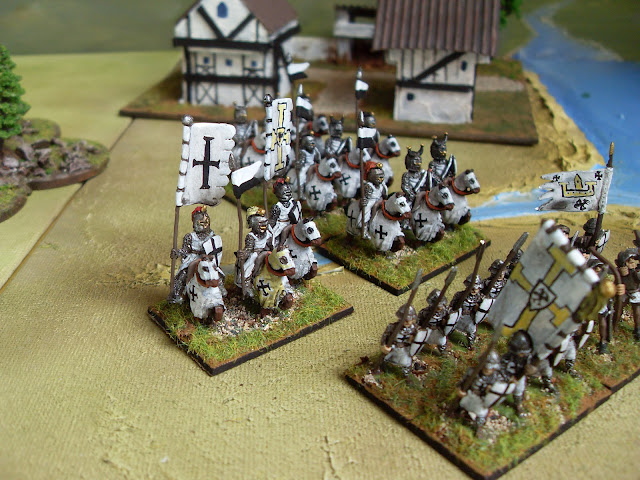 What else do we need ? 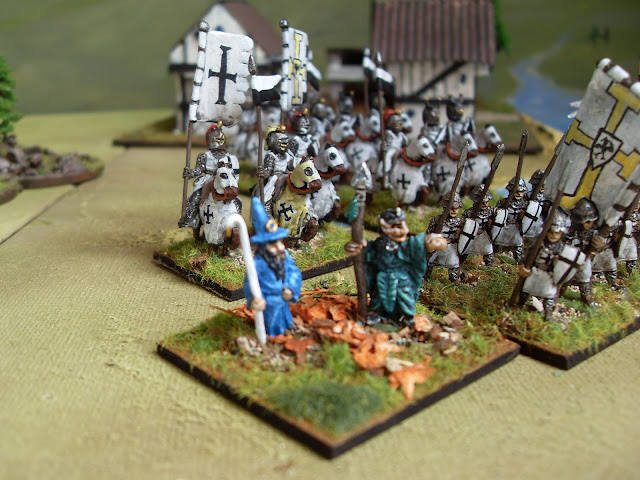 ... The White Wizard and his Elven guide fits in well with the White Citadel theme, so in he goes. 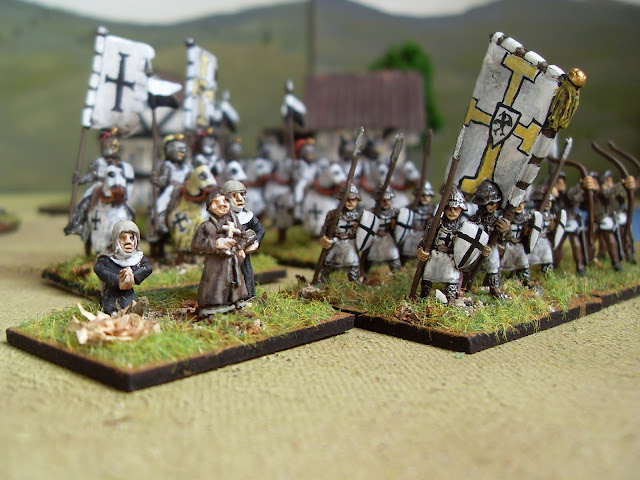 And Pastor Humphries with his 2 pious nieces. 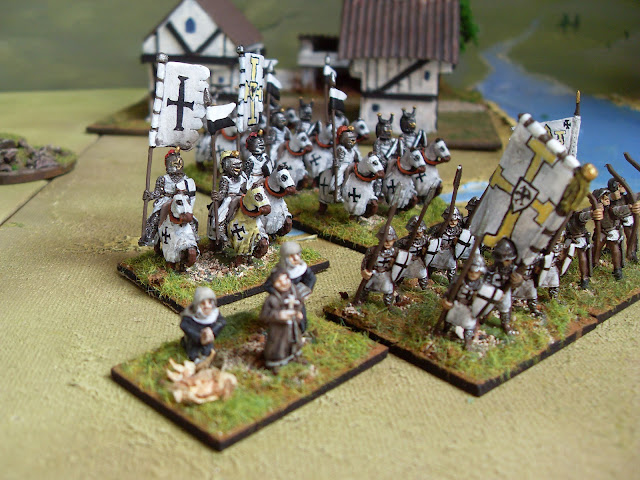 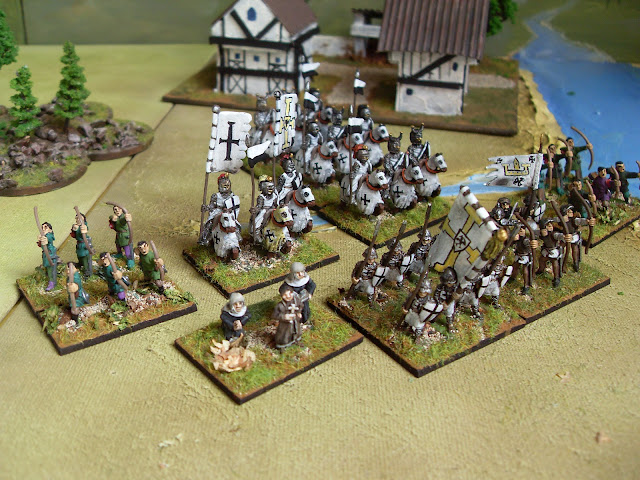 Here we have some flanking protection on both sides courtesy of the Famous Archers detachment  (which includes Stalin, Hitler, Leonard Nimoy and Russel Crowe) 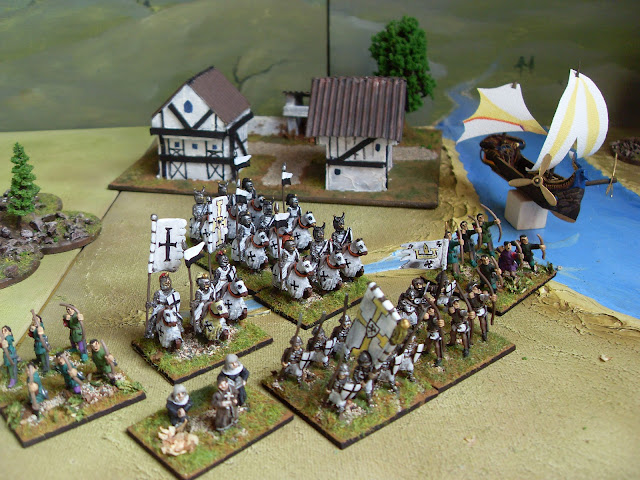 .. add in an airship for support, and we have a nice balanced HoTT army.

Probably over points already, I have lost count at this stage 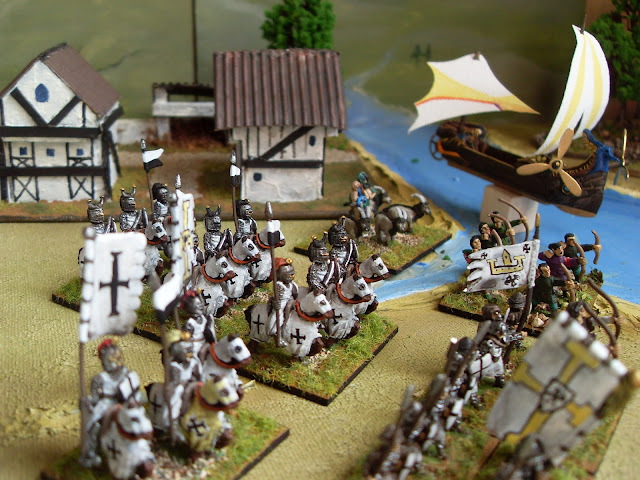 Room on the far left flank there for a BeastMistress with Goats as well. Just the thing for a White Citadel army. .. Till the next 3,333 year cycle, take care.
Posted by Unknown at 14:22