Battle of Jenastaedt 1813 - The Firefight

The main French forces are now engaged in the pinning attack. Lets see if the attackers can hold it together, as the hammer of 1st Corps begins its general advance to assault the pinned French units. 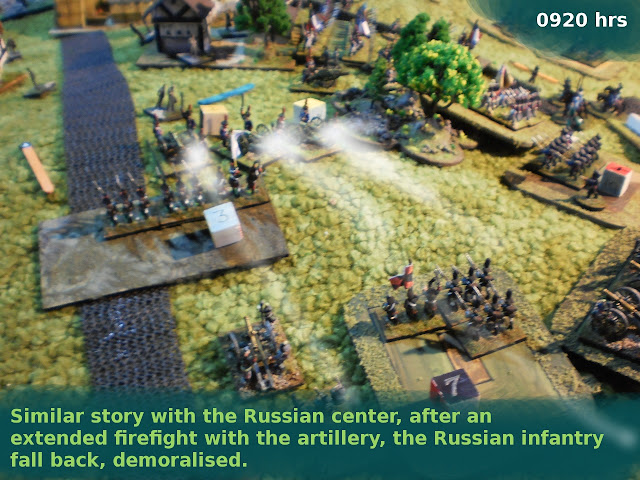 
Rather expensive for the Allies so far, but importantly - because the engagements are at a lower intensity, there is no danger of general panic at this stage.  Just rather nasty attrition.

Within short time, both the Russian and Prussian troops can be rallied and the attack resumed.

The order has gone out for the Austrian 1st Corps to begin their advance. However - they have not started marching yet. Could be a few more die rolls to go.

If the French general knew this fact (that the Austrian command is fumbling its attempt to kick off the main attack), then a daring raid right up the middle may well catch the Allies unprepared, and induce 2 Divisions to break in Panic.

Next - the protracted fight escalates as the Allied artillery gets within range to continue the pinning engagement.