Battle of Jenastaedt 1813 - The Assault

Events in the early afternoon, around half past one :

The Charge of les Invalides ! 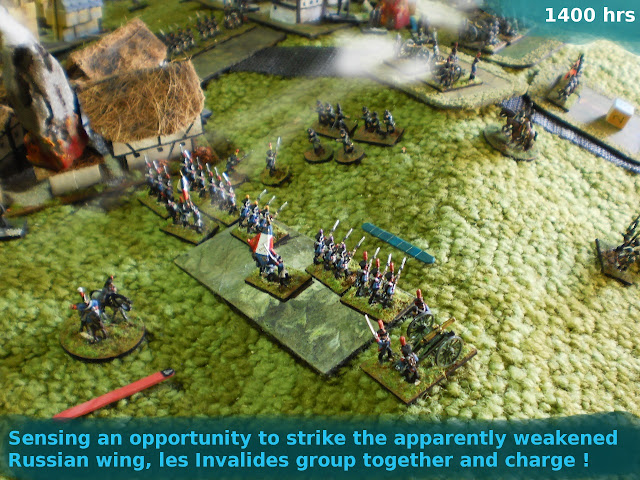 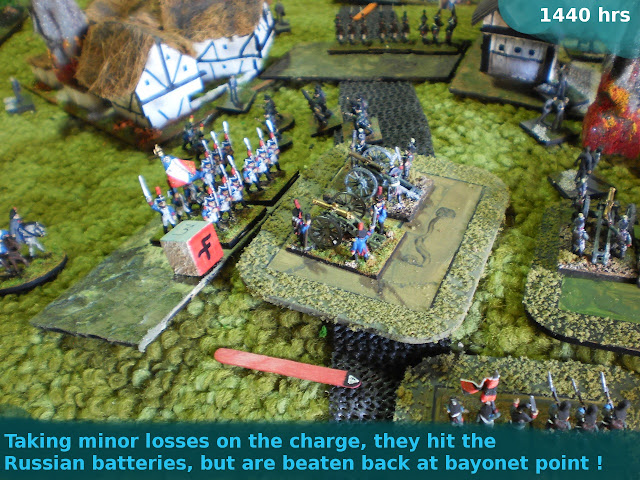 Over on the Allied Right Flank :


Overall, the limited attack concept is working reasonably well. I wanted to make sure that as an Allied commander, I could engage the French so as to pin them down, without risking a wholesale panic due to severe combat losses.

That part of the rule mods does the trick. However, there is a nasty side effect - which is that troops on Engage orders get to attack twice per turn, with little risk of disaster.  That aspect, unfortunately, makes them a little too powerful.

Allowing a force to move in their own phase, as well as the enemy phase ... sounds good in theory when you are writing the rules, but is actually a mess to organise once the game gets rolling. After many turns, you simply loose track of which unit has moved in the current phase .. and I am sure that I may have skipped a unit here and there, or maybe even moved one twice. That aspect will only get worse as the battle gets bigger.

Easy fix - is to allow troops on Engage orders to make a single full move in their own phase, with the defender still able to make minor reaction moves to either perform a fighting withdrawal to avoid contact, or adjust their facing to conform to the attacker.

A unit on Attack orders operates in this fashion, and they get an additional charge bonus if that allows them to end the turn in contact. That part will still work well.

Units on Probe orders still make a half-move each phase, which is OK since they do not end the move in base contact with the enemy. So that should still work.

Another small concern, is that twice now in this game, I have had large infantry formations charge into artillery ... and get beaten off at bayonet point by the gunners !   In each case that is due to unusually large gaps in the opposed die roll, and I suppose there are plenty of historical precedents for that. Still - feels a little strange.

For limited attacks, I am using the 'Infantry Assaulting' table below, but ignoring any breakthrough results.

If the attack fails, then instead of applying 'Panic' results for the attacker, I get them to be pushed back 2" per Panic level.

This generally seems to work OK.  However, because the results table is written to assume that the 'assault' is a full assault, the resultant events do not feel very much like the results of a firefight. (Could be psychological).

What I might do is create an additional results table with some intermediate 'limited firefight' results ... if only to add a little more flavour to the game, and remind the players that this is a limited action.

To balance that, I could tweak the Infantry Assaulting table to be slightly more bloody for both sides, to represent a full on no-holds-barred slog with the bayonet.

Lastly, I am not 100% overjoyed by the new morale / rally resolution rules. That mechanism is described in the rules here :

Its actually as brilliant idea, well implemented. At the start of each phase, the phasing player rolls for each unit with any morale hits to see if they recover somewhat, or possibly get worse. Its a neat mechanism that includes all the detail and accuracy you could hope for.

In practice, it involves a die roll + some mental arithmetic + 2 table lookups for each case where a unit has waivering morale ... each turn.  In practice it is something of a daunting process - especially for a larger game with stacks of units on the table with less than perfect morale.

Playing a huge battle, it would get even worse.

I might try this simplified approach instead to speed up this stage of the game :

If a unit is deemed to be in 'extreme Danger' - as judged by the players, such as sitting in an exposed position in the open, in range of enemy artillery, occupying a burning built up area, etc ... 5+ for success.

If a unit is Demoralised (lowest possible morale grade), then  roll 1D6 as per normal.  This means that Green or Militia units who become demoralised cannot possibly recover morale during the game, and will probably melt away slowly.

If a Divisional commander performs the rally - ie, they are within 2" of the unit being rallied, then the commander can re-roll 1 of the dice.  If the result of that is still 0 success, then the commander has to roll on the leader injury table as an 'Emergency Rally' - and risk getting injured or killed.


If you roll a Double 6, then in addition, the unit gains back 1 base lost from rounding up stragglers and the lightly wounded, and forcing them back into the ranks.

If you roll a Double 1, then regardless of grade, lose an extra base of troops as deserters who turn tail and flee off the field.

As a large battle progresses, you are likely to end up with a large number of small units.  These rules do not play well with lots of small units - they play better with large regimental or brigade groups.


During the command phase (at the end of the player's turn), any Divisional commander may attempt to amalgamate any 2 units into a single larger unit.

The 2 units must be within command radius of the commander, and 1 of the units must be in good morale (formed). Roll on the 'change orders' table - success = join the remnant units into a single new brigade.

So those little rule hacks should speed things up, or at least make the mental gymnastics each turn a little less painful.

Not allowing troops on Engage orders to make a half move each player phase should take a little bit of the sting out of their tail as well.


Next up - I need to juggle some real-life work commitments here between games, so I will finish off this game as it is .... and then reset things back to the start and roll through again with the tweaks mentioned above.

I will play this scenario out 3-4 times over the next week or 2, to bed these rule changes in. Tough work - but its the only way to do it :)

Then I will try it again with card activation and/or random initiative, and see how that affects the game.

So ... thanks for your patience, will be reporting back again soon !
Posted by Unknown at 10:11