A step by step run through of a test game using my new Computer Moderated Napoleonic system - ActionFront !

This is taken from the Leipzig-Nord scenario, with the French III Corps vs the Prussian III Corps in 1813.

To make it even simpler, will start off with the initial contact between a single maneuvre element from each of these 2 Corps sized units.

On the Prussian side, we have the 5th Brigade, on the French side we have the 11e Division.
....

Lets have a look at the 2 forces involved for the initial contact, and how that translates to the tabletop  : 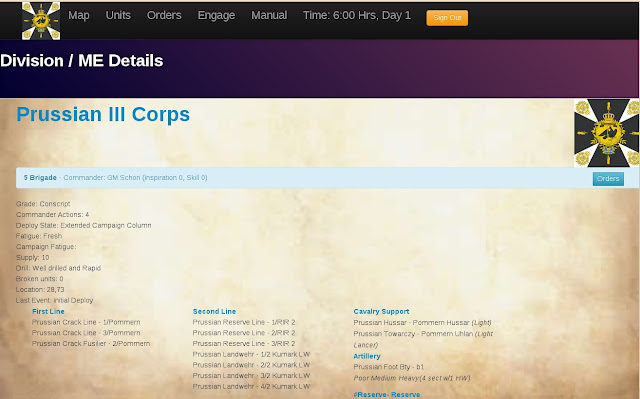 Drilling down through the Prussian order of battle, here are the details for the 5th Brigade of the III Corps.

The Brigade is divided into several 'Lines' or "Abteilungen" within the Brigade structure.

Up front, there is the 1st line, which includes the semi-skirmish screen of the Fusilier battalion, and 2 or more line units close behind.

Here is a closer look at the stats for the units in the 1st line : 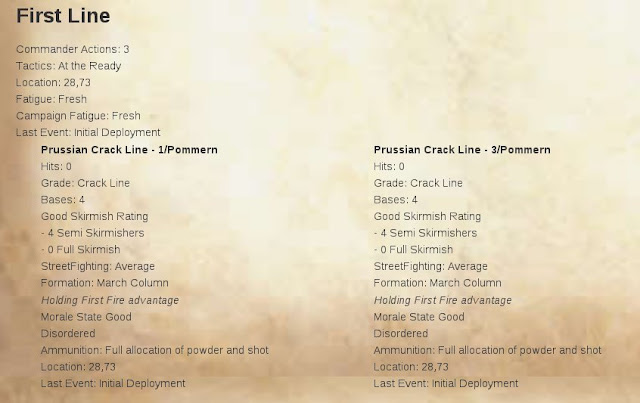 During the initial advance, the Brigade (or ME) is in 'brigade out' deployment - so the 1st line is fully deployed across it's designated width, and the following lines are strung out to the rear in column of march.

Once fully deployed out of campaign column, the second line forms attack columns behind the 1st line. 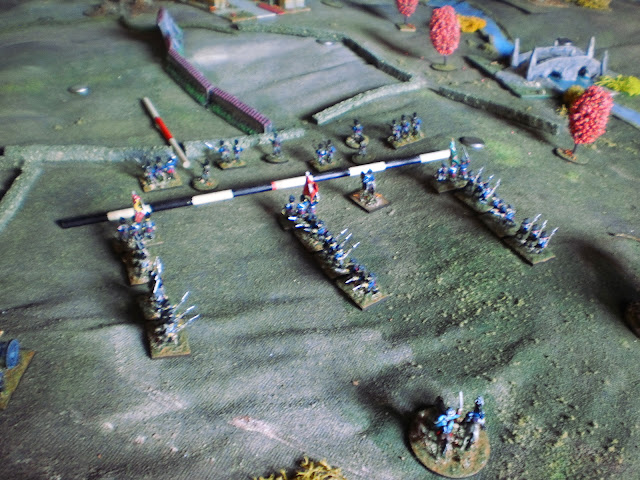 Here is the head of the Brigade on the tabletop - with the 1st line Abteilung deployed.

The Black and White measuring stick is 10 'Base Widths' long,  so that = 500m per measuring stick.  The teeth of the brigade covers around 1km in this case.


There is a single Battalion of Fusiliers deployed about 150m to the front of the brigade.  They are in semi-skirmish order, so they cover a frontage of 8 BaseWidths.

The Red and White "Firing Stick" at the front of the Fusiliers shows the musketry range, divided into Short / Medium / Long range bands.

Behind that is the remainder of the 1st line - 2 Crack line Battalions, and a Reserve battalion which has been bought forward.  The senior battalion is on the Right, and to the front of the line is the Abteilungen commander.
The position of the commander in the line denotes where the regulating battalion is for the whole formation.  (Using regulating battalions here .... there is no 'command radius' in this system)

These battalions are all 4 bases in size each, so they are spaced out at a deployment distance of 4 BaseWidths.  This enables them to deploy fully into line if need be.

There is also a river running to the Right of the Brigade, covered with a bit of dead ground thanks to the rise in the terrain.  So in this case, I have deployed the Brigade on the open plain about 1km from the River, and left the dead ground clear to provide a channel to bring up the rest of the Brigade unseen. 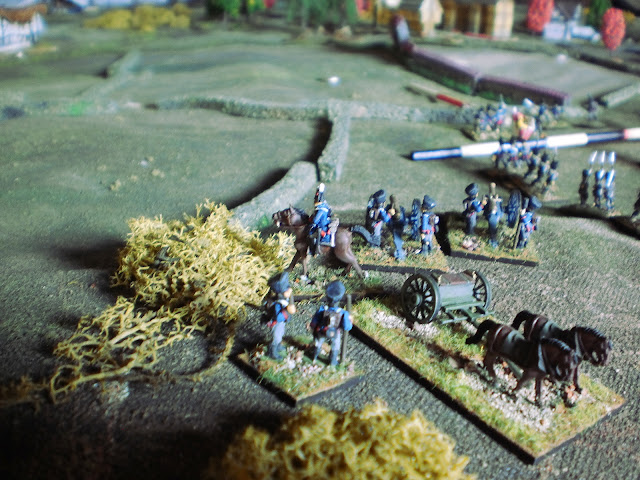 Just over to their left is a small hill, so I have plonked the Brigade artillery battery on the hill to cover the advance. This represents 8 guns, spread over a 200m frontage, with a depth of about 600m.

The whole plain to their front is within long range ... they can lob shot that far, but it wont be overly effective. From here though, they could put in a  prolonged bombardment on the village (white thing on the left) or the Town (stone coloured buildings on the right) to their front for up to 2 hours or so before any main action.

The battery is unlimbered in this case (limber base is behind the battery), and the battery has a dedicated battery commander (single mounted officer base).

There is also a company of Pioneers attached to this battery - in the foreground shot. 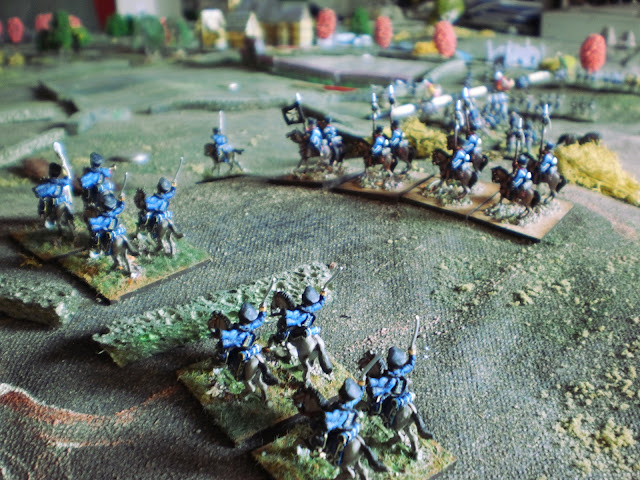 Further to the left is some lovely un-obstructed rolling terrain, with no enemy to the front for about 1 mile.

Perfect spot to the setup the Brigade Cavalry detachment to cover the advance.  4 Sqns of Hussars, and 4 sqns of Lancers + 1 Cavalry commander.

Distance from Brigade HQ to the Cavalry commander is 1200m, so any orders to the Cav commander can be transmitted in the same half-hour turn. 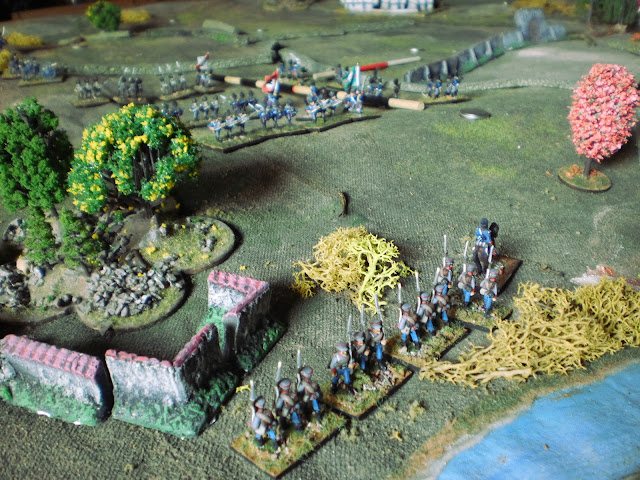 Over to the Right of the 1st Line, following along in the dead ground by the River is the head of the column of the rest of the Brigade.

This is the 2nd line units and Reserve units, with their own Abteilung Commander at the head of the column.

They are strung out to the rear in Campaign column, so will arrive on the board over the next hour or 2.


Now lets cross over the table, and have a quick look at the French as they deploy for battle. 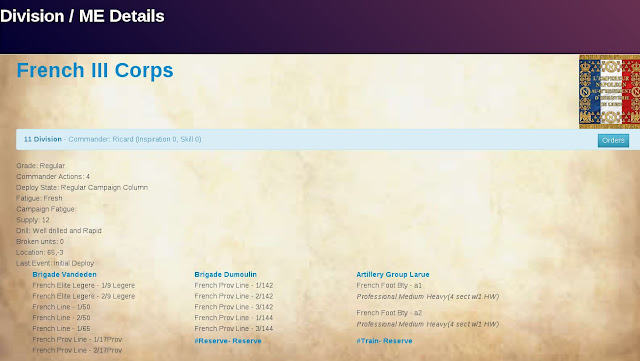 Small - but nasty.  With a mix of Conscript & Provisional line, and Elite veteran Legere units + 2 Batteries, the French pack a big punch still.

This is 1813, so the French Battalions are down to 9 figures each  (or 3 bases per Battalion) 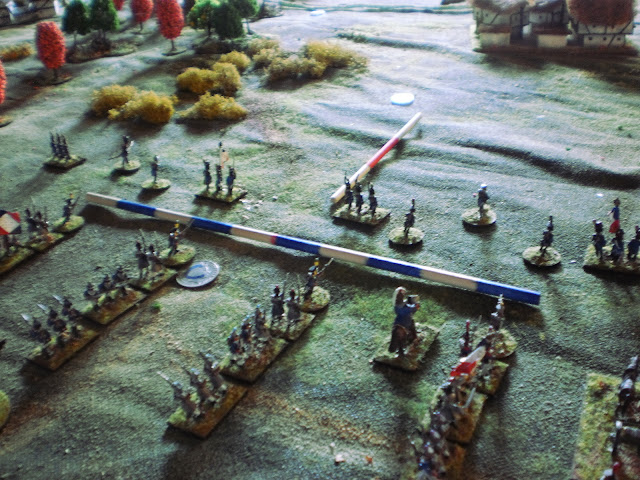 Similar to the Prussians, the French Division is Divided into 'Brigades', giving a 1st line, 2nd line, and Reserve formations.

Couple of minor differences compared to the Prussian deployment above :

Here is a closer look at the French line getting all lined up on the tabletop  : 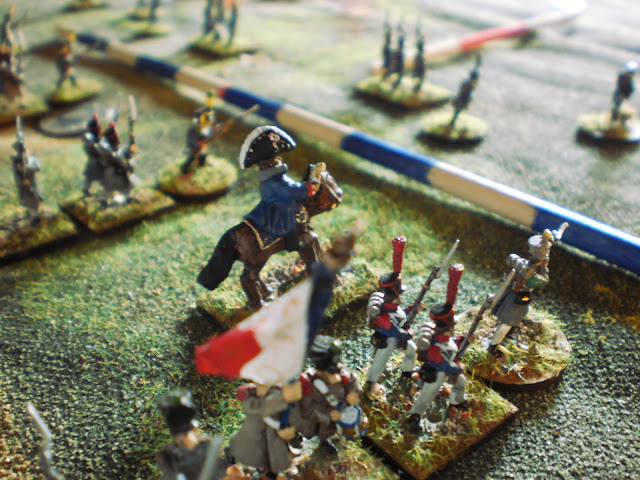 This is the Senior Battalion on the Right of the Brigade line ... with Flag, and the Brigade Commander GdB Vandeden  placed next to it to denote that this is the regulating Battalion.

Brigade commanders can do a few useful things in the course of the game, so its important to get them in the right spot.

They can use a limited number of commander actions to order Skirmish companies forward to join the skirmish screen in the middle of a turn .... order minor tactical adjustments .... resupply ... order opportunity charges ...  for any unit in their Brigade regardless of distance.

However, they can only 'Snap Rally' units that break if they are within 200m (4 Base Widths).

Likewise, they can only do a 'Follow Me' to lead a charge against the enemy for units that they are in base contact with.

So thats all for this post, showing the initial setup of the game as Divisions begin their deployment from the computer map onto the tabletop.

Next post ... will look at issuing Corps and Division level orders to units, setting formations, and making Grand Tactical moves.

I have a monstrous backlog of units that have been painted up since my last posting.  Sort of stacked them away for a while and got on with a few other things, such as getting ready for the next house move ... and building a new coffee shop in the meantime.

Almost ready to start running regular Napoleonic gaming nights at the Cafe as well ... one more little project that may or may not work, but will be fun to try !

Anyway, will start getting into posting that backlog of unit photos as soon as I can :)
Posted by Unknown at 15:28